ALTERNATIVE OR NON-CONVENTIONAL SOURCES OF ENERGY

-   It is estimated that India receives solar energy equivalent to more than 5,000 trillion kWh/year. Under clear sky conditions, the daily average varies from 4 to 7 kWh/m2.

-   Solar constant: It is the solar energy received per unit of time per unit of area on the outer edge of the earth’s atmosphere perpendicular to the Sun’s rays and at earth’s average distance from the Sun. It is about 1.4 kJ per second /m2 or 1.4 kW/m2.

A black surface absorbs more heat as compared to a white or a reflecting surface under identical conditions. It can be demonstrated by the following activity:

o  Take two conical flasks and paint one white and the other black. Fill both with water.

o  Touch the conical flasks. Black is hotter than white.

Solar cookers & solar water heaters use this property. In some solar cookers, mirrors are used to focus the rays of the Sun to achieve high temperature.

Solar cookers are covered with a glass plate to trap sunlight easily and prevent the heat to get escaped (green-house effect). 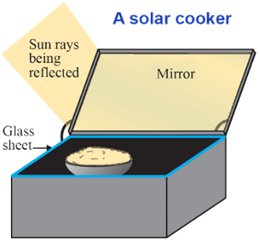 o  It is easy to handle and no chance of an accident.

o  The nutrients in the food do not get destroyed.

o  Cannot use during night and cloudy weather.

These limitations are overcome by using solar cells that convert solar energy into electricity.

A typical solar cell develops a voltage of 0.5–1 V and produce 0.7 W electricity. Many solar cells are combined to deliver enough electricity for practical use. It is called solar cell panel.

o  They have no moving parts.

o  They can be set up in remote hamlets or rarely inhabited areas where laying of power transmission line is expensive.

Silicon is used to make solar cells. It is abundant in nature but special grade silicon is limited. Also, silver is used to interconnect cells in the panel. So, manufacture of solar cells is very expensive.

Domestic use of solar cells is limited due to its high cost.

Energy from the Sea

Due to gravitational pull of the moon on the spinning earth, the water level in the sea rises and falls. This phenomenon is called high & low tides.

Tidal energy is harnessed by constructing a dam across a narrow opening to the sea. A turbine fixed at the opening of the dam converts tidal energy to electricity.

The locations where such dams can be built are limited.

-   Waves are generated by strong winds across the sea.

The water at the sea surface is heated by the Sun. But the deep water is cold. This temperature difference is used to obtain energy in ocean-thermal-energy plants.

They can operate if the temperature difference between surface water and deep water up to 2 km is 20°C or more.

The warm surface-water is used to boil a volatile liquid like ammonia. The vapours are used to run the turbine of generator. The cold deep water is pumped up and condense vapour to liquid.

The energy potential from the sea (tidal energy, wave energy & ocean thermal energy) is quite large, but efficient commercial exploitation is difficult.

Due to geological changes, molten rocks formed in the deeper regions of earth’s crust are pushed upward and trapped in certain regions called ‘hot spots’.

When underground water meets the hot spot, steam is generated. Sometimes hot water from that region comes to the surface. They are called hot springs.

The production cost is low but commercially viable sites are very few.

When the nucleus of a heavy atom (e.g., uranium, plutonium or thorium), bombarded with low-energy neutrons, it splits into lighter nuclei. It is called nuclear fission. As a result, a tremendous energy is released.

It is due to the sum masses of the product nuclei are less than that of the original nucleus. The difference in mass (∆m) gets converted to energy (E). [Based on E = ∆mc2 derived by Albert Einstein. c = speed of light in vacuum].

The atoms that can release nuclear energy are called nuclear fuel. E.g. Fission of a uranium atom produces 10 million times the energy produced by the combustion of an atom of carbon from coal.

-   Nuclear power reactors at Tarapur (Maharashtra), Rana Pratap Sagar (Rajasthan), Kalpakkam (Tamil Nadu), Narora (UP), Kakrapar (Gujarat) and Kaiga (Karnataka) have the capacity of less than 3% of the total electricity generation capacity of our country. It is above 30% for many industrialised countries.

High cost of installation, high risk of environmental contamination and limited availability of uranium prohibits large-scale use of nuclear energy.

Nuclear energy was first used for destructive purposes. The fundamental physics of the fission chain reaction in a nuclear weapon (atom bomb) is similar to controlled nuclear reactor, but both are engineered differently.

It is the joining of lighter nuclei into a heavier nucleus. E.g. hydrogen or hydrogen isotopes create helium.

-    It releases a tremendous energy, according to the Einstein equation (Here, mass of the product is less than the sum of the masses of original nuclei).

-    It is the source of energy in Sun and other stars. It needs considerable energy, extreme temperature & pressure.

-    When the nuclear bomb is detonated, the temperature is raised to 107 K in a few microseconds. It generates energy for the nuclear fusion and a devastating amount of energy is released.

·    The ultimate source of energy for biomass, wind and ocean thermal energy is Sun.

·    Ultimate source of energy of hydroelectricity is the potential energy of water. For wave energy, it is Sun because waves are formed due to wind and wind is formed due to unequal heating of air by Sun.

👉 Part 1: Introduction, What is a Good Source of Energy?