The exploitation of coal led to the industrial revolution. It increased the global demand for energy.

The demand for energy was largely met by fossil fuels (coal & petroleum). But they are non-renewable sources because they were formed over millions of years ago and have only limited reserves. So we need to conserve them and alternate sources must be explored.

The pollution caused by fossil fuels can be reduced by increasing the efficiency of combustion and using various techniques to reduce the release of harmful gases & ashes.

Fossil fuels are also used to generate electricity. This can be demonstrated by the following activity:

o  Make three slits in a table-tennis ball and put semi-circular fins cut out of a metal sheet into them.

o  Now connect a cycle dynamo & a bulb in series to this.

o  Direct a jet of water or steam produced in a pressure cooker at the fins. The bulb glows.

This is the model of turbine for generating electricity. The simplest turbines have a moving part called a rotor-blade (fan). The moving fluid spin the blades and impart energy to the rotor. It turns the shaft of dynamo and convert mechanical energy into electrical energy.

It is the power station where fuel is burnt to produce heat energy which is converted into electrical energy.

Many thermal power plants are set up near coal or oil fields because transmission of electricity is more efficient than transporting coal or petroleum.

Here, kinetic energy of flowing water or potential energy of water at a height is used.

A quarter of energy requirement in India is met by hydropower plants.

There are only few water-falls as a source of potential energy. So, hydro power plants are associated with dams.

To produce hydel electricity, dams are constructed on the river. It obstructs the water flow and collect in larger reservoirs. i.e., the kinetic energy of flowing water is transformed to potential energy. Dam water is carried through pipes, to the turbine, at the bottom of the dam.

Since the water in the reservoir is refilled by rainfall, hydroelectricity sources do not be used up. So hydro power is a renewable source of energy. 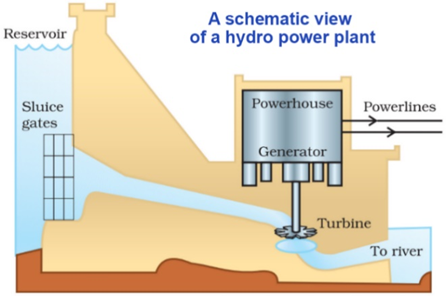 Problems of constructions of big dams:

o  They can be constructed only in few places such as hilly terrains.

o  Agricultural land and human habitation will be submerged. Large eco-systems are destroyed when submerged under the water in dams.

Opposition to construction of Tehri Dam on the Ganga River and Sardar Sarovar project on the Narmada River are due to such problems.

Improvements in the Technology for using Conventional Sources of Energy

It is a renewable source of energy.

However, they do not produce much heat on burning and release a lot of smoke. So, technological inputs are used to improve their efficiency.

When wood is burnt in a limited supply of oxygen, water and volatile materials present in it get removed to give charcoal. Charcoal burns without flames, comparatively smokeless and has a higher heat generation.

Cow-dung, crop residues, vegetable waste, sewage etc. are decomposed in the absence of oxygen to give biogas. Here, the starting material is mainly cow-dung. So, it is popularly known as gobar gas. 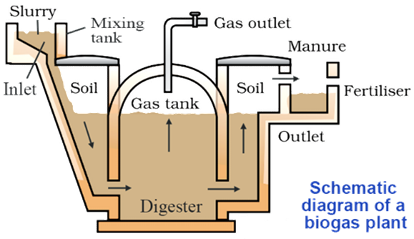 The biogas plant has a dome-like structure (gas tank). A

slurry of cow-dung and water is made in the mixing tank. It is fed into digester (a sealed chamber without oxygen).

Anaerobic microbes decompose complex compounds of the slurry and generate gases like methane, hydrogen, CO2 & H2S. These are the ingredients of biogas. It is stored in gas tank and drawn through pipes.

Biogas is an excellent fuel because

o  It burns without smoke and leaves no residue (ash).

o  It has high heating capacity.

o  It is also used for lighting.

Other advantages of biogas plant:

o  The slurry left behind is used as manure, rich in nitrogen & phosphorous.

Wind is the movement of air caused by unequal heating of the landmass and water bodies by solar radiation.

The wind’s kinetic energy was harnessed by windmills to do mechanical work. E.g. in a water-lifting pump, the rotatory motion of windmill is used to lift water from a well.

A windmill consists of rotor with blades on a support. Its rotatory motion turns the turbine of electric generator.

The output of a single windmill is very small and cannot use commercially. So, many windmills are erected over a large area. It is called wind energy farm. In this, the energy output of each windmill is coupled together to get electricity on a commercial scale.

Wind energy is an environment-friendly & renewable. It has no recurring expenses for production of electricity.

o  Wind energy farms can be established only at the places where wind blows for the greater part of a year.

o  Wind speed should be higher than 15 km/h to maintain the required speed of the turbine.

o  Needs back-up facilities (like storage cells) to meet the energy needs when there is no wind.

o  Tower and blades are exposed to the rain, Sun, storm and cyclone. So they need a high level of maintenance.

Denmark (country of winds) generates >25% of the electricity through windmills. In terms of total output, Germany is the leader. India has 5th rank. Largest wind energy farm (380 MW electricity) was established near Kanyakumari (Tamil Nadu). 45,000 MW electricity can be generated if India’s wind potential is fully exploited.

👉 Part 1: Introduction, What is a Good Source of Energy?