11. The Human Eye and the Colourful World | Class 10 CBSE | Web Notes | Part 4: Dispersion of White Light by a Glass Prism

DISPERSION OF WHITE LIGHT BY A GLASS PRISM

When sunlight passes through a small hole, it gives a narrow beam of white light.

Allow the light beam to fall on the face of a glass prism.

The prism splits the incident white light into a band of 7 colours. They are Violet, Indigo, Blue, Green, Yellow, Orange and Red (VIBGYOR).

The band of the coloured components of a light beam is called its spectrum.

The splitting of light into its component colours is called dispersion.

Different colours of light bend in different angles with respect to the incident ray. The red light bends the least while the violet the most. Thus the rays of each colour emerge along different paths and become distinct.

Isaac Newton was the first to use a glass prism to obtain the solar spectrum. He tried to split the colours of the spectrum of white light further by using another similar prism. However, he did not get any more colours. He then placed a second identical prism in an inverted position with respect to the first prism. The colours of the spectrum passed through the second prism and emerged as a beam of white light from the other side of second prism. Thus Newton proposed the idea that the sunlight is made up of 7 colours.

Any light that gives a spectrum similar to that of sunlight is referred to as white light.

A rainbow is a natural spectrum. It is always formed in a direction opposite to the Sun. The rain water droplets in the atmosphere act like small prisms. They refract and disperse the incident sunlight, then reflect it internally. It again refracts when comes out of the raindrop. Due to dispersion and internal reflection, different colours reach the observer’s eye. 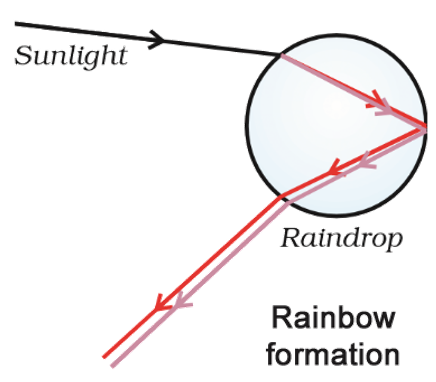 Rainbow can be also seen when look at the sky through a waterfall, with the Sun behind us.