The path of a beam of light passing through a true solution is not visible. But it is visible through a colloidal solution due to scattering of light.

When a beam of light strikes particles in the atmosphere, the path of the beam becomes visible. The light reaches us, after being reflected diffusely by particles.

Tyndall effect is the phenomenon of scattering of light by the colloidal particles or very fine suspension. E.g.

o  When a beam of sunlight enters a smoke-filled room, the particles become visible due to scattering of light.

o  When sunlight passes through a canopy of a dense forest, tiny water droplets in the mist scatter light.

Why is the colour of the clear Sky Blue?

The red light has a wavelength about 1.8 times greater than blue light. Thus, when sunlight passes through the atmosphere, the fine particles in air scatter the blue colour more strongly than red. The scattered blue light enters the eyes.

If the earth had no atmosphere, there would be no any scattering. Then, the sky would have looked dark.  The sky appears dark to passengers flying at very high altitudes, as there is no prominent scattering.

Red is least scattered by fog or smoke. So, it can be seen in the same colour at a distance. Therefore, red colour is used in Danger signal lights.

Colour of the Sun at Sunrise & Sunset

The blue colour of the sky and the reddish appearance of the Sun at the sunrise & sunset can be understood by a demonstration using a set up given below:

o  Fine microscopic sulphur particles precipitate in 2 - 3 minutes. As a result, blue light can be observed from the three sides of the glass tank. This is due to scattering of short wavelengths by colloidal sulphur particles.

o  Observe the colour of the transmitted light from the fourth side of the glass tank facing the circular hole. It is observed at first the orange red colour and then bright crimson red colour on the screen.

Light from the Sun near the horizon passes through thicker layers of air and larger distance in the earth’s atmosphere. So, the blue light & shorter wavelengths are scattered away by the particles. Therefore, only the light of longer wavelengths reaches our eyes. So the Sun appears reddish.

Light from the Sun overhead travels relatively shorter distance. At noon, the Sun appears white as only a little of the blue and violet colours are scattered. 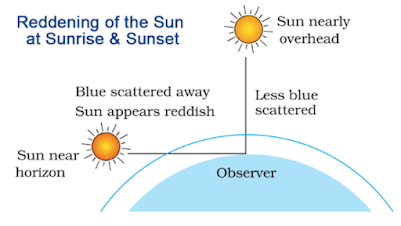