Salts having same positive or negative radicals belong to a family. E.g. NaCl & Na2SO4 belong to family of sodium salts. NaCl & KCl belong to the family of chloride salts.

Common salt (sodium chloride, NaCl) is a neutral salt formed by the reaction of HCl & NaOH solution.
NaCl is separated from seawater containing many salts.
Deposits of large crystals of solid salt are also found in several parts. These are often brown due to impurities. This is called rock salt.
There are beds of rock salt formed when seas of bygone ages dried up. Rock salt is mined like coal.
Common salt is used in food. It is also a raw material to make sodium hydroxide, baking soda, washing soda, bleaching powder etc.

When electricity is passed through an aqueous solution of sodium chloride (brine), it decomposes to form sodium hydroxide. It is called the chlor-alkali process because of the products formed– chlor for chlorine and alkali for sodium hydroxide.

Chlorine gas is given off at the anode, and hydrogen gas at the cathode. NaOH solution is formed near the cathode.
All three products are useful.
Uses of NaOH: De-greasing metals, soaps & detergents, paper making, artificial fibres etc.
Uses of Cl2: For water treatment, in swimming pools, PVC, disinfectants, CFCs, pesticides etc.
Uses of H2: Fuels, margarine, ammonia for fertilisers. 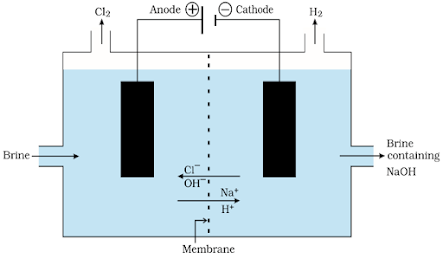 Important products from the chlor-alkali process

It is manufactured by using chlorine produced during the electrolysis of brine.

Chlorine acts on dry slaked lime to give bleaching powder.

Actual composition of CaOCl2 is quite complex.

It is a mild non-corrosive basic salt.

When it is heated for cooking, the following reaction occurs.

A basic salt obtained from NaCl.

Are the Crystals of Salts really Dry? 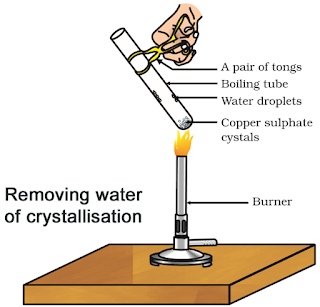 On heating gypsum at 373 K, it loses water molecules and becomes a white powder. This is called Plaster of Paris or Calcium sulphate hemihydrate (CaSO4. ½ H2O).
Plaster of Paris on mixing with water, it changes to gypsum again giving a hard solid mass.

Only half a water molecule is shown to be attached as water of crystallisation. It is written in this form because two formula units of CaSO4 share one molecule of water.

Uses of Plaster of Paris:

Plaster of Paris gets its name from large gypsum deposits in Montmartre in Paris.