Why Sexual Mode of Reproduction?

It is the reproduction in which both sexes (male & female) are needed to produce new generations.

Variations do not protect all individuals in a population but help for survival of the species. If the DNA copying mechanisms are less accurate, the resultant DNA cannot work with cellular apparatus and will die.

But sexual reproduction can generate more variations and speed up the making of new variants by combining DNA copies from two individuals.

All these variations are accumulated and inherited from generation to generation. It produces individuals with different patterns of variations in a population.

But new generation will not have twice the amount of DNA. It is due to a process of specialised cell division called meiosis. It occurs in sex organs.

During meiosis, gametes (germ cells) are formed in which number of chromosomes and amount of DNA are half as compared to the non-reproductive cells.

Gametes from two individuals combine to form zygote that becomes a new individual. It re-establishes the chromosome number & DNA content in new generation.

Reproductive parts of angiosperms are located in flower.

Parts of a flower are sepals, petals, stamens & pistil. 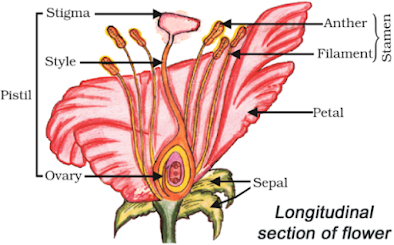 o  Stigma: Terminal part which may be sticky.

Pollination: It is the transfer of pollens from stamen to the stigma. It is 2 types:

o  Crosspollination: Transfer of pollen from one flower to another by agents like wind, water or animals. 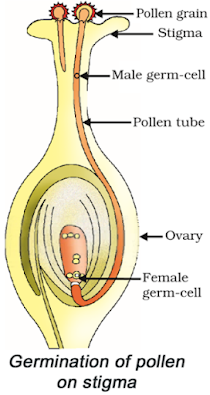 Male germ cell fuses (fertilization) with the female gamete in the ovule to form zygote.

Then the zygote divides several times to form an embryo within the ovule.

The ovule develops a tough coat and becomes a seed.

The ovary grows rapidly and ripens to form a fruit.

👉 Part 1: Do Organisms Create Exact Copies of Themselves?