In early teenage, the appearance and proportions of body change and new features and sensations appear. These changes indicate the sexual maturation.

Changes common to boys and girls:

o  Thick hair grows in armpits and the genital area which becomes darker in colour.

o  Skin frequently becomes oily that may cause pimples.

o  Breast size increases and darkening of skin of nipples.

o  Thick hair on the face.

o  Erection of penis in daydreams or at night.

All these changes occur slowly and gradually.

The pattern and duration of these changes are varied in different people. So, they have different patterns of hair growth, size and shape of breast or penis.

Up to adult stage, resources of the body are mainly used for growth, not for maturation. Then the growth rate slows down and reproductive tissues begin to mature. This period during adolescence is called puberty.

Changes during puberty are signals of sexual maturity so that other individuals can identify them for mating.

It consists of two testes and ducts to deliver germ cells. 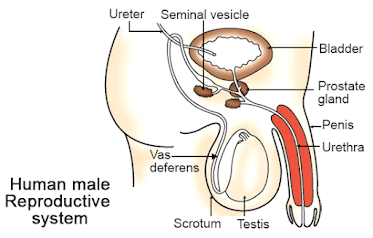 Testes: In these, germ cells (sperms) are formed.

Testes are located in scrotum because sperm formation requires a lower temperature than body temperature.

Testes also secrete a hormone, testosterone. It regulates formation of sperms and changes in boys during puberty.

Ducts: Include vas deferens to deliver sperms which unites with urethra coming from urinary bladder. Thus, urethra forms a common passage for sperms and urine.

Along the path of vas deferens, glands like prostate and seminal vesicles release some fluid secretions. These are mixed with sperms to form semen. It makes sperm transport easier and provides nutrition.

A sperm consists of genetic material and a long tail that helps to move towards female germ cell (egg). 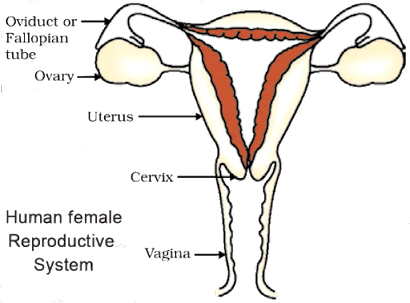 Female germ cells (ovum or egg) are made in the ovaries. They also produce some hormones.

-   The ovaries of a newly born girl contain thousands of immature eggs. At puberty, some of them starts maturing. One egg is produced every month by one of the ovaries. It is carried from the ovary to the womb (uterus - elastic & bag-like) through a thin oviduct (fallopian tube).

The uterus opens into the vagina through the cervix.

During sexual intercourse, sperms are transferred into the vagina through penis.

The uterus prepares every month to receive and nurture the embryo. The lining becomes thick and spongy. It has rich supply of blood to nourish the embryo.

Placenta: This is a disc of a special tissue embedded in the uterine wall. It connects foetus to mother. It contains villi on the embryo’s side. On the mother’s side are blood spaces surrounding the villi. Villi increase surface area.

o  The embryo gets nutrition from the mother’s blood.

Development of the child inside the mother’s body takes about 9 months. The child is born as a result of rhythmic contractions of the muscles in the uterus.

What happens when the egg is not fertilised?

If the egg is not fertilised, it lives for about one day.

The lining of uterus slowly breaks and comes out through vagina as blood & mucus. This cyclic process occurring every month is called menstruation. It lasts for 2-8 days.

A woman’s body & mind should be ready for sexual act, being pregnant bringing up children. If not, her health will be adversely affected.

There are many sexually transmitted diseases. E.g. gonorrhoea & syphilis (bacterial infections) and warts & HIV-AIDS (viral infections). They can be prevented by using condom for the penis during sex.

o  Mechanical barriers: They prevent the meeting of sperm with egg. E.g. Condoms or coverings worn in the vagina.

o  Oral pills: They change the hormonal balance of the body. So eggs are not released and fertilisation does not occur. It has side effects due to hormonal imbalance.

o  Loop or copper-T: They are placed in uterus to prevent pregnancy. They cause side effects due to irritation of the uterus.

Surgery can also be used to remove unwanted pregnancy. But it is misused for illegal sex-selective abortion (female foeticide). Due to this, female-male sex ratio is declined. So prenatal sex determination is prohibited.

By reproduction, population is increased. The birth and death rates in a given population determine its size. Population explosion adversely affects people’s standard of living. However, inequality in society is the main reason for poor standards of living.

👉 Part 1: Do Organisms Create Exact Copies of Themselves?