Plants have no nervous system or muscles. But they can respond to stimuli.

o  Dependent on growth: E.g. When a seed germinates, root goes down and stem comes up.

o  Independent of growth: E.g. When we touch the leaves of a chhui-mui (the ‘sensitive’ or ‘touch-me-not’ of Mimosa family), they quickly fold up and droop.

In sensitive plant, movement happens at a point different from the point of touch. It means information about touch is communicated. Plants use electrical-chemical means to conduct information from cell to cell.

Movement Due to Growth

Some plants (e.g. pea) have tendrils to climb up or fence. They are sensitive to touch.

When tendrils contact with a support, the touching part does not grow as rapidly as the part away from object. So, tendril circles around and clings to the object.

Plants respond to stimuli slowly by growing in a direction. Because of the directional growth, it appears as if the plant is moving.

Environmental triggers such as light, gravity etc. change the directions of plant growth. They are called tropic (directional) movements. These can be towards the stimulus (positive), or away from it (negative).

It is the tropic movement in response to light.

Roots respond by bending away from light (negative).

It can be proved by the following activity. 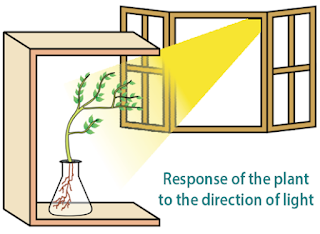 Movement in response to the pull of earth or gravity.

Shoots grow upwards and away from earth (negative). 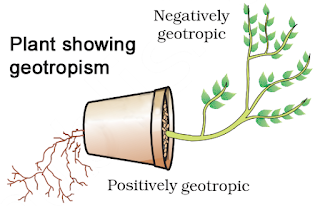 The movement of a plant toward or away from water.

The movement of plant towards or away from chemicals.

Controlled movements can be either slow or fast. E.g.

o  Sunflowers slowly move in response to day or night.

For fast responses to stimuli, information must be transferred very quickly. Electrical impulses are an excellent means for this. But it has some limitations:

o  They reach only the cells having connection with nervous tissue.

o  Once an impulse is generated and transmitted, the cell will take some time to reset its mechanism to generate a new impulse. So, cells cannot continually create and transmit electrical impulses.

So most multicellular organisms use chemical (hormone) communication between cells.

In this, stimulated cells release a hormone and it diffuses around the original cell. Other cells detect hormone using special molecules on their surfaces. Then they recognise information and transmit it.

This is slower process but can reach all cells and can be done steadily and persistently.

Plant hormones can coordinate growth, development and responses to the environment. They are synthesised at some places and diffuse to the area of action.

o  Gibberellins: Help in the growth of the stem.

o  Cytokinins: Promote cell division. They are present in greater amount in areas of rapid cell division, such as fruits and seeds.

The above hormones help in promoting growth.