Such movements are carefully controlled and coordinated by specialised tissues. Also, they are connected to recognition of various events in the environment.

In animals, control and coordination are provided by nervous and muscular tissues.

Nervous tissue is made up of a network of nerve cells (neurons). It conducts information (electrical impulses) from one part of the body to another.

General perception of taste is jointly created by tongue (taste) and nose (smell). That’s why if nose is blocked or we have cold, there is a difference in taste of foods. 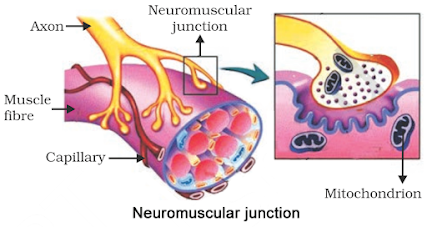 What happens in Reflex Actions?

Reflex actions are sudden unconscious actions of the body in response to a stimulus in the environment. E.g.

o  Withdrawal of hand when we touch a flame.

o  Blinking of eyes when light falls on them.

Here there is no thinking as it needs an immediate response.

Thinking needs complicated interaction of many nerve impulses from many neurons.

In brain, thinking tissue sits in the forward end of the skull. It receives signals from all over the body and thinks about before responding to them.

If thinking part is to instruct muscles to move, nerves must carry this signal back to different parts of the body. It takes much time and prevents quick response. E.g. when we touch a hot object, it would take much time to withdraw the hand if thinking tissue is involved. 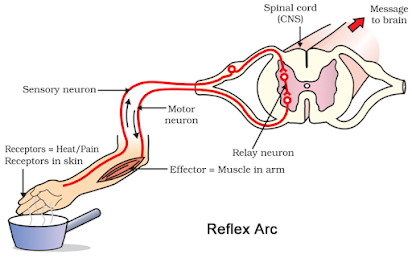 Nerves from all body parts meet in spinal cord on their way to the brain.

Reflex arcs evolved as efficient ways of functioning in the absence of true thought processes in animals. However, after complex neuron networks have evolved, reflex arcs continue to be more efficient for quick responses.

Sequence of events (reflex arc) of focussing bright light on eyes are given below:

Brain & spinal cord constitute the central nervous system (CNS). They receive information from all parts of the body and integrate it.

Brain is protected in a fluid-filled balloon (shock absorber) inside the bony box (cranium).

Spinal cord is protected in vertebral column or backbone.

Brain is the main coordinating centre of the body. It involves more complex mechanisms & neural connections for complex processes such as thinking.

Spinal cord contains nerves which supply information to think about.

Communication between CNS and other parts of the body is facilitated by the peripheral nervous system (PNS). It consists of cranial nerves (from brain) and spinal nerves (from spinal cord). 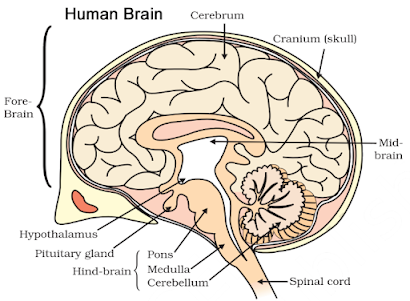 Forebrain is the main thinking part of the brain. It has the following regions:

o  Association areas: They interpret sensory information by associating with information from other receptors and previously stored information. Thus, a decision is made to respond. This information is passed to the motor areas which control the movement of voluntary muscles.

o  Centre of hunger: It gives sensations such as feeling full when food is eaten.

In our body, there are involuntary actions between simple reflex actions and thought-out actions. We do not have thinking control on them. E.g. salivation, heartbeat etc. They are controlled by mid-brain and hind-brain.

Cerebellum in hindbrain controls voluntary actions like walking, riding a bicycle, picking up a pencil etc. It also maintains the posture and balance of the body.

How does Nervous Tissue cause Action?

When a nerve impulse reaches the muscle, the muscle fibres (muscle cells) move by changing their shape so that they shorten.

Muscle cells have special proteins that change their shape and arrangement in response to nervous electrical impulses. This gives the muscle cells a shorter form.

Voluntary muscles: The muscles attached to skeleton. They can be moved as we decide.

Involuntary muscles: The muscles found in visceral organs. They are not under our control.