It is the oxidation of the food material in cells to release energy for various life processes.
Some organisms use oxygen to breakdown glucose into CO2 and water. Some do not use oxygen.

Experiment to prove release of CO2 during respiration in human 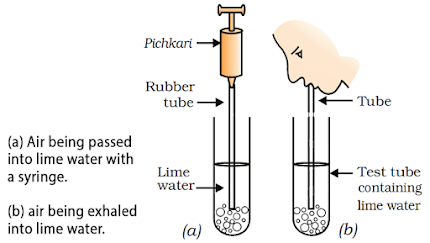 Experiment to prove release of CO2 during respiration in Yeast

In all types of respiration, the first step is the breakdown of glucose (6-carbon) into pyruvate (3-carbon). It takes place in the cytoplasm.

ATP is used to fuel all other cellular activities. When the terminal phosphate linkage in ATP is broken using water, energy (30.5 kJ/mol) is released. It drives the endothermic reactions in the cell.
A battery is used to obtain mechanical energy, light energy, electrical energy etc. Similarly, ATP can be used for muscle contraction, protein synthesis, conduction of nervous impulses etc.

It occurs through stomata. Here, CO2 & oxygen are exchanged by diffusion. The large intercellular spaces in leaves help the cells in contact with air.

In fishes, the respiratory organ is gills with gill slits behind their eyes. They may be covered by operculum.

During breathing, fishes open and close mouth & gill slits (or operculum) in a coordinated manner and timing. They take in water through mouth and pumps over the gills. From the gills, dissolved O2 is taken up by blood.

In terrestrial animals, there are different types of organs to breathe atmospheric oxygen. They increase surface area which is in contact with the atmosphere.

It involves lungs & air passage.
Air passage starts from nostrils through which air is taken into the body. Air passage is lined with fine hairs & mucus to filter the air.
Conduction of air through the passage is as follows:
Nostrils → nasal passage → pharynx → larynx → trachea → bronchi → bronchioles → lungs.
Rings of cartilage in the throat and trachea prevent collapsing of air-passage. 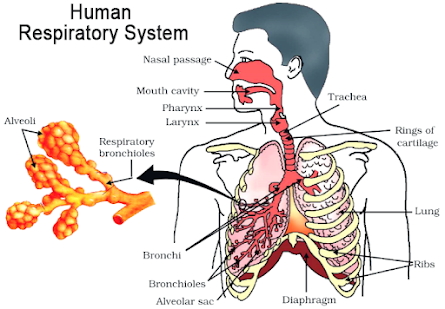 Within the lungs, the passage divides into smaller tubes (bronchi & bronchioles).
Bronchioles terminate in balloon-like structures called alveoli (sing. alveolus).
Gas exchange occurs in the surface alveoli.
Alveolar walls contain a network of blood vessels.
When we breathe in, ribs are lifted and the diaphragm gets flattened. As a result, the chest cavity becomes larger and air enters the lung alveoli.
The blood brings CO2 from the rest of the body to release into the alveoli. Oxygen in the alveoli is taken up by blood in the alveolar blood vessels and is transported to all body parts.

During the breathing cycle, the lungs always contain a residual volume of air so that there is sufficient time to absorb oxygen and release CO2.
In large-sized animals, diffusion pressure is not sufficient to deliver O2 to all body parts. So, respiratory pigments take up oxygen from the lungs and carry it to tissues.
In humans, the respiratory pigment is haemoglobin on red blood corpuscles (RBC). It has high affinity for O2.
CO2 is more soluble in water than oxygen and hence is mostly transported in the dissolved form in our blood.

- If the alveolar surface were spread out, it would cover about 80 m2. The surface area of human body is about 1.9 m2.

- If diffusion were to move oxygen in our body, it would take 3 years for an oxygen molecule to get to toes from our lungs. Haemoglobin helps in faster gas transport.