It is the process of movement of water and other molecules to the concerned parts of the organism.

Blood is a fluid connective tissue.
It consists of a fluid medium called plasma in which blood cells (RBC, WBC & platelets) are suspended.
Plasma transports food, O2, CO2 and nitrogenous wastes.
Oxygen is mainly transported by Haemoglobin.
Normal level of haemoglobin in human beings:
The normal level of haemoglobin in animals like buffalo or cow is 10.4 to 16.4 g/ 100 ml. Haemoglobin content in calves is higher than male and female animals.
Adult men do more work than women and children. So they need more oxygen to get energy. That’s why adult men have more haemoglobin.
Haemoglobin level in human is comparatively more than that of animals like cattle because human body needs more oxygen to do various biological works.

Our pump – the heart 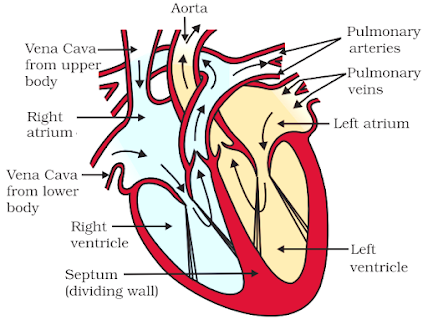 A schematic sectional view of the human heart
Heart pumps the blood all over the body.
It is a muscular organ that is as big as our fist.
It has 4 chambers: 2 upper right and left atria and 2 lower right and left ventricles.
Right chambers carry CO2-rich (deoxygenated) blood. Left chambers carry O2-rich (oxygenated) blood.
Deoxygenated blood reaches the lungs to remove CO2. Oxygenated blood from the lungs is brought back to the heart and then pumped to the rest of the body.

Since ventricles have to pump blood into various organs, they have thicker muscular walls than that of atria.

Heart has valves to prevent the backflow of blood when the atria or ventricles contract. 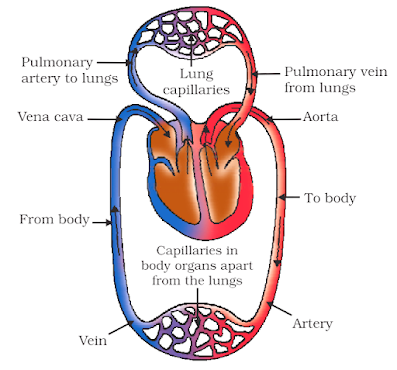 Schematic representation of transport and exchange of oxygen and CO2

Oxygen enters the blood in the lungs

The separation of right side and left side of the heart prevents mixing of oxygenated and deoxygenated blood. This allows a highly efficient supply of oxygen to the body. It is useful in animals that need high energy (birds & mammals) to maintain body temperature.

Animals like amphibians & many reptiles do not use energy to maintain temperature. They depend on the temperature in the environment. Such animals have 3-chambered heart, and tolerate some mixing of the oxygenated and deoxygenated blood.

Fishes have only 2-chambered heart. Here, circulation occurs as follows:

In other vertebrates, blood goes through the heart twice during each cycle. This is called double circulation.

- It is the force that blood exerts against the wall of a vessel. This is much greater in arteries than in veins.

- Systolic pressure: Blood pressure in the artery during ventricular systole (contraction). It is about 120 mm Hg.

- Diastolic pressure: Blood pressure in the artery during ventricular diastole (relaxation). It is about 80 mm Hg.

- Sphygmomanometer: An instrument to measure BP.

- High BP (hypertension) is caused by the constriction of arterioles, which increases resistance to blood flow. It leads to the rupture of an artery and internal bleeding.

It includes arteries, veins and capillaries.
Arteries: They carry blood from heart to various body parts. Since the blood emerges from the heart under high pressure, the arteries have thick, elastic walls.
On reaching an organ or tissue, the artery divides into small branches (arterioles) to bring the blood in contact with all the cells.
Veins: They collect the blood from different organs and bring it back to the heart. They have no thick walls because the blood is no longer under pressure. Instead, they have valves to flow the blood only in one direction.
Capillaries: The smallest vessels having walls which are one-cell thick. Through this wall, exchange of material between blood and surrounding cells takes place.
The capillaries join together to form veins that convey the blood away from the organ or tissue.

Leakage or loss of blood due to injury leads to reduction in pressure and efficiency of circulatory system.

To avoid this, the platelet cells plug these leaks to clot the blood at the points of injury.

Through the pores in the capillary walls, some amount of plasma, proteins and blood cells escape into intercellular spaces in the tissues to form lymph.

It is similar to blood plasma but colourless and contains less protein.

From intercellular spaces, lymph drains into lymphatic capillaries, which join to large lymph vessels that finally open into larger veins.

Lymph carries digested fat from intestine and drains excess fluid from extracellular space back into the blood.

Soil is the nearest and richest source of raw materials (water & minerals).
If the distance between roots & leaves are small, energy and raw materials can easily diffuse to all parts. But if the distance is large, a transportation system is essential.
Plants do not move and have enormous dead cells. So, they need only low energy and slow transport systems.
Plant transport systems include 2 independently organised conducting tubes:

In xylem tissue, vessels & tracheids of the roots, stems and leaves are interconnected to form water-conducting channels reaching all parts.
At the roots, cells actively take up ions from soil. This creates a difference in the concentration of ions between root and soil. So, water moves into the root from the soil. Thus there is steady movement of water into root xylem, creating a column of water pushing upwards.
But this pressure is not enough to move water over the heights. So, plants use another strategy called transpiration.
Transpiration is the loss of water vapour from the aerial parts (mainly stomata of leaves) of the plant. It can be proved by the following activity.
The water which is lost through the stomata is replaced by water from the xylem vessels in the leaf.
Transpiration creates a suction which pulls water from the xylem cells of roots.
Thus, transpiration helps in the absorption and upward movement of water & minerals from roots to the leaves. It also helps in temperature regulation.
Generally, stomata are closed at night. So, plants depend on the root pressure for water transport at night.
During the day when stomata are open, the transpiration pull is the major driving force in the water transport.

Transport of food & other substances

Transport of soluble products of photosynthesis (food) from leaves to other parts is called translocation.
It occurs in a vascular tissue called phloem.
Phloem also transports amino acids & other substances.
These substances are delivered to the storage organs of roots, fruits and seeds and to growing organs.
Translocation takes place in the sieve tubes with the help of adjacent companion cells both in upward and downward directions.
Xylem transport occurs mainly by simple physical forces. But for the translocation in phloem, energy is utilised.
Material like sucrose is transferred into phloem using energy from ATP. This increases the osmotic pressure of the tissue causing water to move into it. This pressure moves the material in the phloem to tissues. E.g., in the spring, sugar stored in root or stem is transported to the buds which need energy to grow.