MAKING ORDER OUT OF CHAOS – THE MODERN PERIODIC TABLE

Henry Moseley (1913) showed that the atomic number (Z) is a more fundamental property than atomic mass.

Atomic number= Number of protons in an atom’s nucleus.

‘Properties of elements are a periodic function of their atomic number.’

Arrangement of elements based on increasing atomic number led to Modern Periodic Table. In this, more precise prediction of properties of elements is possible. 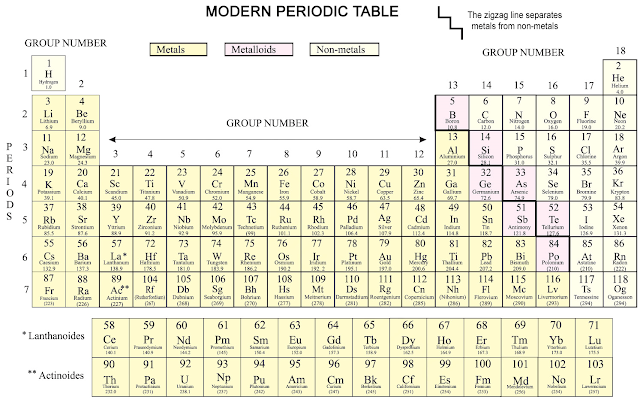 Position of Elements in the Modern Periodic Table

Groups signify an identical outer shell electronic configuration. All elements in a group contain same number of valence electrons. The number of shells increases as go down the group.  E.g.

Here, all elements have same number of valence electron (i.e., 1).

There is an anomaly in case of the position of hydrogen. It can be placed in group 1 or 17 in the first period.

Atoms of different elements with the same number of shells are placed in the same period.

Number of elements in periods are based on how electrons are filled into various shells.

Maximum number of electrons that can be accommodated in a shell depends on the formula 2n2 (n= number of the shell). E.g.

Mendeleev used formulae of compounds as a basic property to decide the position of an element. This was a good choice because elements are arranged in groups based on the number of valence electrons and valency.  Since valency in a group is same, they will form similar formulae with hydrogen, oxygen etc. Thus they show similar chemical properties.

Trends in the Modern Periodic Table

It is the number of electrons that must be lost or gained by an atom to attain a stable configuration.

It is determined by the number of valence electrons present in the outermost shell of its atom.

Valency of a metal = Number of valence electrons.

Valency of a non-metal = 8 – No. of valence electrons.

In a period, from left to right, valency increases 1 to 4 then decreases from 4 to 0.

When going down a group, valency remains the same.

It refers to the radius of an atom. i.e., distance between the centre of the nucleus and outermost shell.

In a period, atomic radius decreases from left to right. This is due to an increase in nuclear charge which pull the electrons closer to the nucleus reducing atomic size. E.g.

Here, Li has largest atom and O has smallest atom.

Atomic radii of 1st group elements in an increasing order. Here, Li has smallest atom and Cs has largest atom.

In the middle, semi-metal or metalloid are found. They show intermediate properties of metals and non-metals. These borderline elements include boron, silicon, germanium, arsenic, antimony, tellurium & polonium.

Metals form bonds by losing electrons. So they are electropositive.

Non-metals form bonds by gaining electrons. So, they are electronegative.

In a period, tendency of gaining electrons increases from left to right up to 17th group. It decreases in 18th group.

Tendency of gaining electrons decreases down a group.