Dmitri Ivanovich Mendeleev (1834-1907, a Russian chemist) was the most important contributor to the development of Periodic Table.

Mendeleev’s Periodic Table proved to be the unifying principle in chemistry. It was the motivation for the discovery of new elements.

Mendeleev started his work with 63 known elements. He examined relationship between the atomic masses (fundamental property) of the elements and their physical & chemical properties.

Mendeleev concentrated on the compounds (hydrides & oxides) formed by elements with oxygen & hydrogen. He selected these elements as they are very reactive and form compounds with most elements. The formulae of the hydrides & oxides were treated as a basic property.

He wrote down the properties of each element on 63 cards and sorted out them with similar properties. He found that most elements were arranged in the increasing order of atomic masses.

There was a periodic recurrence of elements with similar physical & chemical properties. Thus, he formulated a Periodic Law. It states that ‘the properties of elements are the periodic function of their atomic masses’. 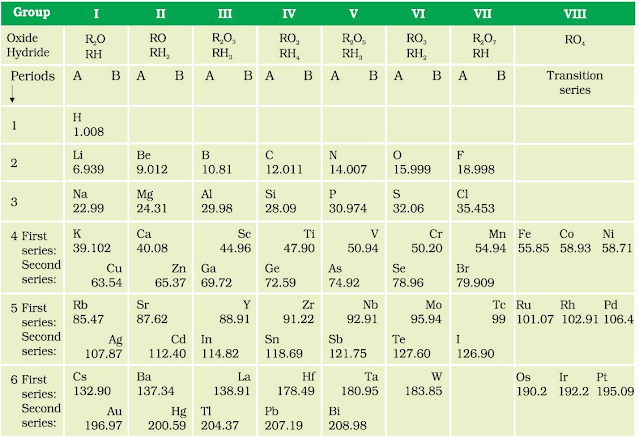 Mendeleev left some gaps in Periodic Table and predicted the existence of some elements.

He named them by prefixing Eka (one) to the name of preceding element in the same group.

Properties of eka–aluminium and gallium

It proves the correctness and usefulness of Mendeleev’s Periodic Table.

Noble gases like helium (He), neon (Ne) & argon (Ar) were discovered very late because they are very inert and rarely present in the atmosphere. They could be placed in a new group without disturbing the existing order.

1.   No fixed position to hydrogen because:

·  Like halogens, hydrogen exists as diatomic molecules and combines with metals and non-metals to form covalent compounds.

2.  Isotopes of an element have similar chemical properties, but different atomic masses. So they cannot be placed in same slots. E.g. Cl-35 & Cl-37 are isotopes of chlorine.

3.  Atomic masses do not increase in a regular manner from one element to the next. So it was not possible to predict how many elements could be discovered between two elements especially in case of heavier elements.