1.   Find out the initiator codon among the following: (1)

2.   (a) Complete the flow chart given below showing DNA finger-printing technique. 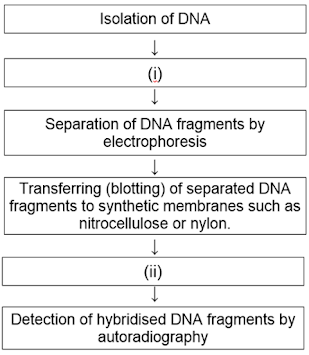 (b) Who developed the DNA finger-printing technique?

(a) (i)  Digestion of DNA by restriction endonuclease.

3.   Schematic structure of a transcription unit is given below: (2)

(a) a. Promoter. b. Structural genes. c. Terminator.

4.   Lactose catabolism in the absence of inducer in E. Coli is given below: (3)

(b)   Draw the diagram in the presence of inducer.

a.  Write any other two salient features of genetic code.

b.  Which is the initiator codon? And name the amino acid it codes.

(a) Genetic code is degenerate. 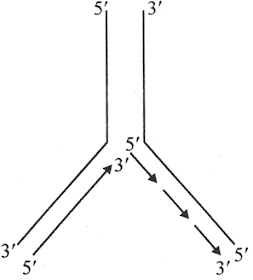 a.  Identify the process in the picture.

b.  Name any two enzymes needed for this process.

c.  Write the peculiarities of the newly synthesized daughter strands.

a.   Write down the sequence of its complementary strand.

b.   Name the enzyme involved in transcription of DNA.

c.   What would happen if both the strands of the DNA act as templates for transcription?

(c) It results in the production of 2 RNA molecules simultaneously. This would be complimentary to each other. It forms a double stranded RNA and prevents translation.

1.   In a double stranded DNA, the ratios between Adenine and Thymine, Guanine and Cytosine are constant and equal one. Who observed this fact? (1)

2.  Observe the diagram of a double stranded DNA strand: (2)

3.  The following diagram shows a process in the Ribosome: (2) 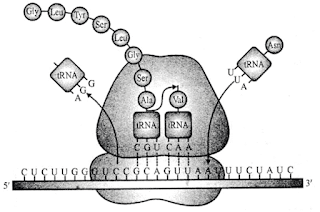 Identify the process and explain.

The process is Translation (Protein synthesis).

a.   Charging (aminoacylation) of tRNA.

1.   Diagrammatic representation of the central dogma given below is not correct. Make necessary corrections and redraw it. (1) 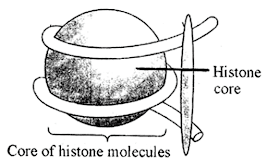 a.   Identify the figure.

b.   How many histone molecules are present in the Histone core.

3.   Diagrammatic representation of the DNA fingerprint from a crime scene and that of a suspected person are given below: (3) 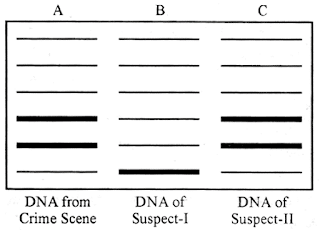 a.  What is your conclusion about the suspects based on DNA Fingerprint given?

c.  Who developed this technique first?

a.     Suspect II may be responsible for the crime. Because DNA from crime scene matches with DNA of suspect II.

b.     A DNA sequence which is tandemly repeated in many copy numbers is called variable number tandem repeats (VNTR).

4.  The diagrammatic representation of a process in bacteria is given below: (3) 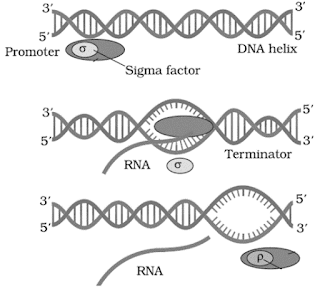 a.    Identify the process.

b.    Name the enzyme involved in this process.

c.    Explain the three major steps in this process.

Termination: A termination factor (ρ factor) binds to the RNA polymerase and terminates the transcription.

1.   'Human genome project is a mega project" Give two reasons to explain this. (2)

It was a 13-year long project.

It has sequenced 3 x 109 bp in human genome with the help of computer.

It has identified about 30,000 genes in human genome.

2.   Observe the diagram and answer the following questions: (2) 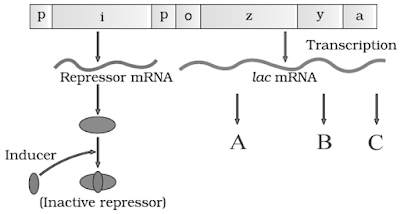 (b) A= beta galactosidase, B= Permease, C= Transacetylase.

3.   "Genetic code is universal in nature"

a.      Substantiate this statement.

b.     Mention any two other salient features of genetic code. (2)

(a) It means from bacteria to human, each triplet codon codes for the same amino acid.

(b) Genetic code is unambiguous.

1.  Expressed sequences in the gene are called (1)

2.   DNA is tightly packed structure and is found as units called nucleosomes. (2)

(a)   Explain the concept of nucleosomes.

(b)   Differentiate between euchromatin & heterochromatin.

(b) • Euchromatin: Loosely packed and transcriptionally active region of chromatin.

3.   Identify the disadvantages of RNA over DNA as a genetic material and explain it. (2)

It is catalytic and hence reactive. It is single stranded and has 2’-OH group in sugar. So RNA is less stable and mutate faster.

4.  (a) In lac Operon lactose act as inducer molecule. Evaluate the statement and explain it.

(b) Observe the diagram of lac Operon and identify labelled parts A, B, C and D. (3)

(a) The statement is true. Lactose switches on the lac operon system inducing the action of structural genes.

(b) A= Repressor mRNA, B= b-galactosidase, C= Permease D= Transacetylase.