a.   Complete the flow chart given below and answer the following questions (2)
b.   Mention principles behind the DNA fingerprinting. (1)
c.    DNA fingerprinting is a gift to forensic science. Do you agree? Give reason. (1)
2.     Diagram of a double stranded polynucleotide chain is shown below. What do the numbers I, II, III & IV indicate? (2)

a.   Name the parts labeled as (i) and (ii) (1)
b.   How many histone units constitute the main core of the nucleosome? (1)
c.    Histones are considered as basic proteins. Why? (1)
2.     During the eukaryotic transcription, the genetic information encoded in the DNA will be transferred to mRNA. The mRNA thus formed will be processed and utilized in synthesis of protein.
a.   Both DNA strands are not copied during transcription. Why? (1)
b.   What do template & coding DNA strands represent? (1)
c.    What will be the result, if RNA is not spliced before translation? (1)
2011 MARCH
1.     Observe the diagram below

a.   What is your opinion about the paternity of child? Substantiate your opinion. (1)
b.   List down any four major steps of molecular biological procedures adopted for this. (2)
c.    What do you understand by VNTRs? (½)
d.   Who developed this technique for the first time? (½)
2011 SAY
1.     A DNA molecule which contains most of its nitrogen in the form of 15N is allowed to replicate in a medium containing the nitrogen source 14N.
a.   What will be the percentage of DNA strands that contain 15N after 2 rounds of replication? (1)
b.   Who conducted this experiment and what conclusion they reached from this experiment?  (1)
2.     Central dogma of molecular biology is given in the diagram. 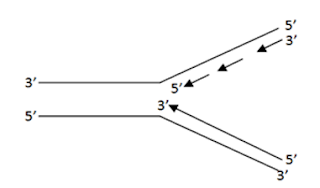 a.   Redraw the diagram correctly and label it. (½)
b.   Why does discontinuous synthesis of DNA occur in one strand? (1½)
2012 MARCH
1.     A transcription unit is given below. Observe it and answer the questions.

a.   How can you identify the coding strand? (1)
b.   Write the sequence of RNA formed from this unit. (1)
c.    What would happen if both strands of the DNA act as template for transcription? (1)
2.     In E. coli, lactose catabolism is controlled by Lac operon. Lac operon in the absence of inducer (lactose) is given below.