The pioneer species in xerarch succession is:

2.   Observe the figure given below and identify the type of age pyramid for human population: (1)

(b)   Give an example of a detritivore.

1.   Which one of the following has the largest population in a food chain? (1)

Hydrarch succession: It is the succession in water body that leads to change from hydric to mesic condition.

Xerarch succession: It is the succession in dry areas that leads to change from xeric to mesic condition.

3.   Given below is a data showing number of individuals and dry weight of different trophic levels in a grassland ecosystem. Construct,

(a) Pyramid of number:

(b) Pyramid of biomass:

1.   Decomposition takes place through different steps. The first step is fragmentation. Write the other four steps. (2) 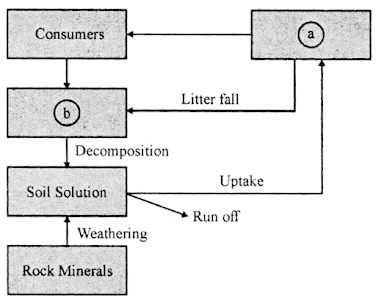 Name the nutrient cycle and fill in the blank (a), (b).

Name of the cycle: Phosphorous cycle.

(b) Pyramid of energy is always upright. Why? 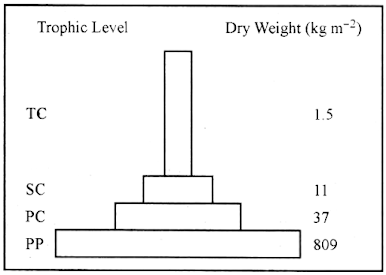 (a) Pyramid of biomass.

b.     Write an example for a detritivore.

(a) Detritivores are the organisms that breaks detritus to smaller particles.

2.   Humification leads to accumulation of a dark coloured amorphous substance. Identity the substance and its peculiarities. (2)

The substance is Humus.

It is highly resistant to microbial action and decomposition.

Serves as a reservoir of nutrients.

3.   Hydrach succession take place in wetter areas and the successional series progress from 'hydric' to 'mesic' condition. List out the stages in correct sequence. (3)

1.   The products of ecosystem processes are named as ecosystem services. list out any four such services. (2)

When energy flows from a trophic level to the next higher trophic level, some energy is always lost as heat at each step.