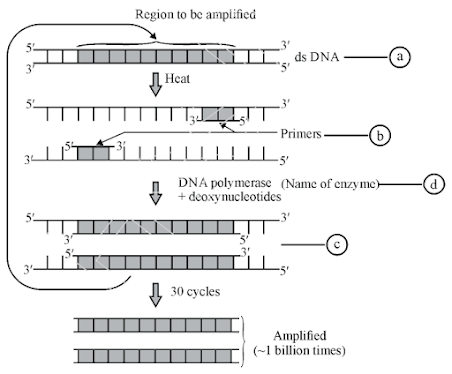 2.   How can we make a host cell competent to receive a foreign gene or DNA? (2)

Treating the cells with specific concentration of a divalent cation such as calcium.

Incubating the cells with recombinant DNA on ice. Place them briefly at 420C (heat shock). Again, place them back on ice.

3.   The following are the diagrams of two important processes used in rDNA technology. (3) 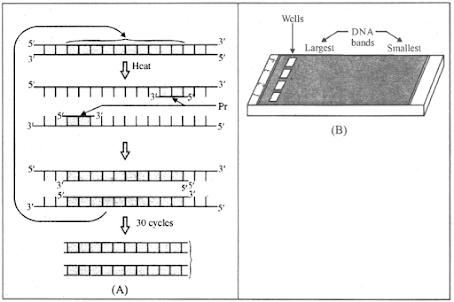 b.   Write the uses of A and B in rDNA technology.

(a) A= Polymerase Chain Reaction (PCR)

(b) PCR is used for the amplification of gene of interest.

1.   Restriction endonuclease recognises a specific sequence in the DNA. Name that sequence and write its peculiarity. (2)

Peculiarity: It is a sequence of base pairs that read the same on the two strands in 5' → 3' direction and in 3' → 5' direction.

1.   What is the function of Restriction Endonuclease in recombinant DNA technology? (1)

a.  Link together fragments of DNA

b.  Make millions of copies of DNA

c.  Cut DNA into many fragments.

(c) Cut DNA into many fragments

1. Isolation of the Genetic Material (DNA).

2. Cutting of DNA by restriction enzymes.

3.   The discovery of Restriction Endonuclease is considered as "milestone" in the history of genetic engineering. (3)

a.  Which is the first discovered restriction endonuclease?

b.  What are the criteria for naming of restriction endonuclease?

Fourth letter: Strain of bacterium from which the enzyme is isolated.

1.   'In Gel electrophoresis, the separated DNA fragments can be visualized after staining. Name the stain used for it. (1)

2.   Multiple copies of gene of interest can be synthesised in vitro. Name the technique and its requirements. (2)

3.   Restriction endonuclease enzymes are used to cut the DNA at specific sequence. (3)

a.  Write the name of first isolated one.

b.  Write the convention for naming these enzymes.

Fourth letter: Strain of bacterium from which the enzyme is isolated.

1.    The DNA fragments can be separated using gel electrophoresis. (2)

a. Name the gel used in this technique.

b. Write the name of technique used to remove the DNA from the gel. 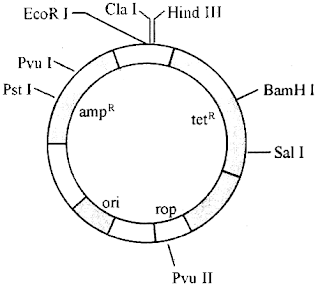 a.   Identify the figure.

(b) (i) Tetracycline resistance gene

(ii) Gene that codes for the proteins involved in the replication of plasmid.