MOLECULAR BASIS OF INHERITANCE:
CHAPTER AT A GLANCE

THE DNA
DNA & RNA are polynucleotides (polymer of nucleotides).

Nucleoside= A nitrogen base + pentose sugar (by N-glycosidic bond).

Nucleotide= A nitrogen base + A pentose sugar (ribose in RNA & deoxyribose in DNA) + a phosphate group. 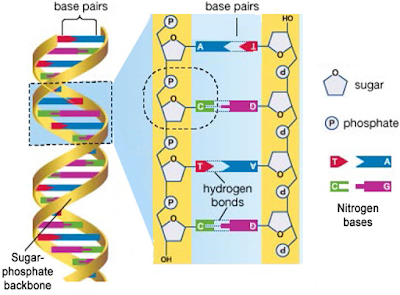 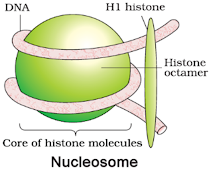 Chromatin has 2 forms:
THE SEARCH FOR GENETIC MATERIAL

Digestion of DNA with DNase inhibited transformation. It proves that DNA was the transforming principle.

Bacteria infected with viruses having radioactive DNA were radioactive. i.e., DNA had passed from the virus to bacteria.

Bacteria infected with viruses having radioactive proteins were not radioactive. i.e., proteins did not enter the bacteria from the viruses. This proves that DNA is the genetic material.

CENTRAL DOGMA OF MOLECULAR BIOLOGY
It is proposed by Francis Crick.

DNA REPLICATION
Replication is the copying of DNA from parental DNA.

DNA replicates in the 5’→3’ direction.

Formation of RNA from one strand of the DNA.

In transcription, both strands are not copied because
3 regions of a Transcription Unit

◦ A terminator: The site where transcription stops.

Structural gene in a transcription unit is 2 types:
Transcription in prokaryotes (bacteria): 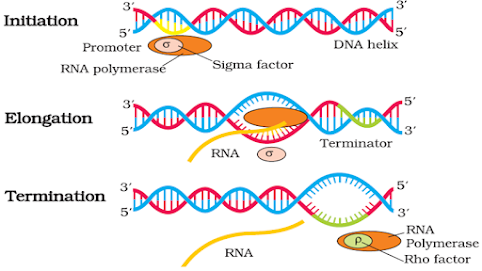 Transcription in eukaryotes: There are 2 additional complexities: 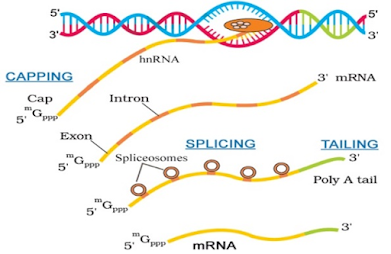 GENETIC CODE
It is the sequence of nucleotides (nitrogen bases) in mRNA that contains information for protein synthesis.

TRANSLATION (PROTEIN SYNTHESIS)
mRNA has sequences that are not translated (untranslated regions or UTR). They are required for efficient translation.

Levels of gene expression in eukaryotes:
Lac Operon: All the genes regulating lactose metabolism in E. coli. It consists of

a) A regulatory or inhibitor (i) gene: Codes for repressor protein.

First mega project for sequencing of nucleotides and mapping of all genes in human genome.

Goals of HGP:
Methodologies of HGP: 2 approaches.
Procedure of sequencing:

It is developed by Alec Jeffreys.

VNTR is specific in each person.