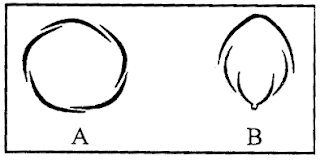 a. Identify the aestivation A and B.
b. Write one peculiarity of A.
c. Name the three kinds of petals in B.
✔️Answer:
2. Observe the figures A and B given below: (Score 2) 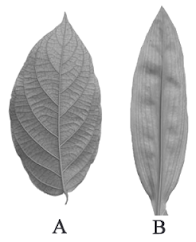 a. Name the type of venation in A and B.
b. Define venation.

(a) A= Reticulate venation, B= Parallel venation.
(b) It is the arrangement of veins and veinlets in the leaf lamina. 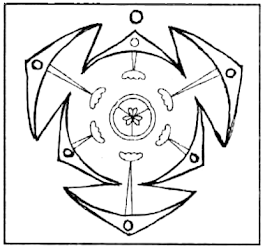 a. Identify the family.
b. Write down any two distinguishing features of gynoecium.
c. Write any two economically useful plants belonging to this family.

Name the modifications seen in these plants. Write their functions.

1.   The following figures A and B shows two different types of phyllotaxy. (Score 2) 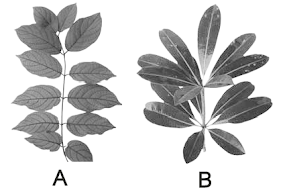 Identify the phyllotaxy A, B and explain them.

A – Opposite: Leaves lie opposite to each other (A pair of leaves at each node).

B – Whorled: More than two leaves at each node

2.  Based on the symmetry, the flowers can be classified into three types. Name and explain them. (Score 3)

1.   Observe the relationship between the first two terms and fill in the blank. (Score 1)

2.   Observe the diagrams given below. 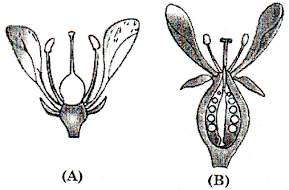 Name the type of ﬂowers A and B. Give one example of each. (Score 2)

o Racemose: The main axis continues to grow. Flowers are borne laterally in an acropetal succession.

o Cymose: The main axis terminates in a flower, hence is limited in growth. Flowers are borne in a basipetal order.

1.  a)  The arrangement of ﬂowers on the ﬂoral axis is called

b) o Actinomorphic (radial symmetry): Here, a flower can be divided into 2 equal radial halves in any radial plane passing through the centre.

o Zygomorphic (bilateral symmetry): Here, a flower can be divided into two similar halves only in a particular vertical plane. 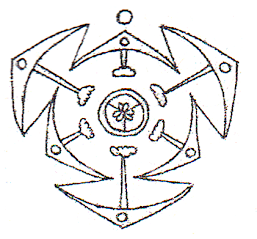 a) Identify the family.

b) Write any four floral characters of the identified family.

1.   Four stem modifications are given below. Three of them are underground modifications. Pick the odd one out as your answer. (Score 1)

2.   Write the names of aestivations in figures 1, 2 and 3. Identify aestivation of petals in pea flowers from the above three aestivations. (Score 2)

Vexillary is the aestivation of pea flowers.