1. Name-of the bones of appendicular skeleton are given below. (Score 2)
(a) Select the bones of pectoral girdle.
(b) Name the articulating cavity between femur and pelvic girdle

(a) Clavicle, Scapula.
(b) Acetabulum.

a. Remove the mask of active sites for binding myosin
↓
b. A signal sent out by CNS
↓
c. Binding of Ca2+ with troponin
↓
d. Release of a neuro-transmitter substance
↓
e. Release of Ca2+ into the sarcoplasm

a. A signal sent out by CNS
↓
b. Release of a neuro-transmitter substance
↓
c. Release of Ca2+ into the sarcoplasm
↓
d. Binding of Ca2+ with troponin
↓
e. Remove the mask of active sites for binding myosin


1. Observe the figures given below:


1. Complete the division of human skeletal system by- filling the blanks. (Score 2) 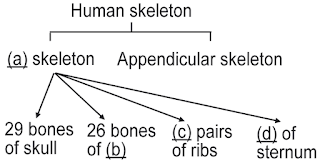 
1. Identify the disorders based on the symptoms given below. (Score 2)

2. Select the WRONG statement regarding muscles from those given below and correct it. (Score 2)

a. Each muscle fibre is lined by the plasma membrane called sarcolemma.
b. The light bands are called 'A' band or Anisotropic band.
c. The Portion of the myofibril between two successive 'Z' lines is called a sarcomere.
d. Muscle contains a red coloured oxygen storing Pigment is called' myoglobin.


1. Select the bones of the leg from the given list of bones. (Score 2)


1. How does the increased level of calcium ion in the sarcoplasm help in muscle contraction? (Score 2)

Ca ion binds with a subunit of troponin on actin filaments and unmask the active sites for myosin.
Using energy from ATP hydrolysis, myosin head binds to active sites on the actin to form cross bridge.

2. Certain disorders and their causes are given. Match them suitably. (Score 2)


1. An athlete met an accident on the ground. His thigh bone slipped off from the girdle.

a. Write the name of the above-mentioned girdle?
b. Identify the type of joint that slipped off?
c. Name the disorder caused due to the accumulation of uric acid crystals in such a joint? (Score 2)


1. Compete the following chart showing structure of myosin filament and its protein based on the hints given in the brackets. (Score 2) 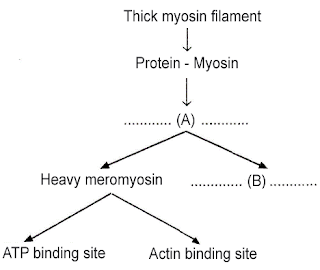 (A) Meromyosin
(B) Light meromyosin


1. “A contracted muscle becomes shorter and thicker but its volume remains the same.” (Score 2)

a) Which theory explains the process of muscle contraction?
b) Identify two contractile proteins seen in muscle.

(a) Sliding Filament Theory.
(b) Actin and Myosin.


1. Based on the diagram given below, can you write down the structural changes occurring in sarcomeres during muscular contraction? (Hint: Any 2 changes) (Score 2) 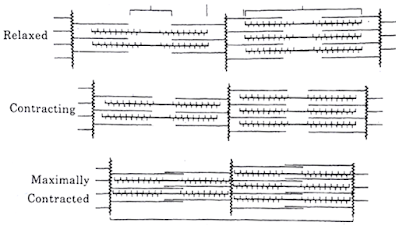 
1. Red muscle fibres have greater capacity to do work for a prolonged period, whereas white muscle fibres suffer from fatigue after a short work. Evaluate the statement. (Score 2)