1.     Observe the organization chart given below and fill appropriately. No need to redraw the chart. 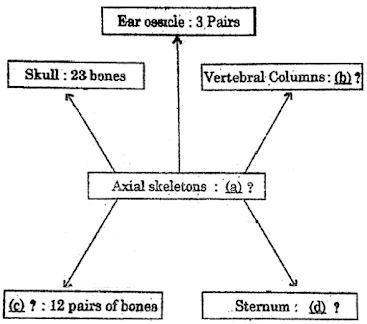 1.     Observe the relaxed unit of a muscle given below.

a.   Redraw the diagram when the muscle unit is maximally contracted. (1)
b.   Repeated activation of the muscle can lead to fatigue. Justify.  (1)

1. Joints are essential for all types of movements involving the bony parts of the body.
a. Write any three major types of joints in our body. (1½)
b. Name the disease caused by the accumulation of uric acid crystals in joints. (½)

1.     Observe the structural representation of the muscle given below:

1.     In your practical class, teacher brought a tray containing the following human bones.
Humerus, Patella, Carpals, Ulna, Radius, Tibia, Tarsals, Femur
a.   Categorize them into two (1)
b.   Give the criteria of your categorization. (1)      (2 Score)

1. Give two examples for each of the following: (2)
a. Synovial joints
b. Muscular proteins

1. The important findings in the case sheet of two patients A and B show that both are suffering from disorders of the skeletal system.
a. Patient A is suffering from inflammation of joints due to the accumulation of uric acid crystals.
b. Patient B shows decreased bone mass and decreased level of oestrogen. Identify the disorders or diseases of A and B. (1+1=2)