2010 March
1. Grasses are capable of regeneration in spite of continuous grazing by cattle.
Suggest the reason for it. (1)

2. What are bulliform cells? Mention their function. (2)

1. Suggest a method for identification of stem and root in plants based on the arrangement of protoxylem. (1)

2. In dicot stem cambium occurs between xylem and phloem and the vascular bundles are arranged in a broken ring fashion. However, dicot stem grows in diameter in a circular manner. Explain briefly how this could happen. (2)

1. In most woody trees, epidermis breaks to form a lens shaped opening. Name this opening that permits gaseous exchange. (1)

1. a) Teacher asked Gopi to name the layer from which root hairs and lateral roots arise respectively. (1)

b) Differentiate the vascular bundles from the (A and B) diagrams given below. (½) 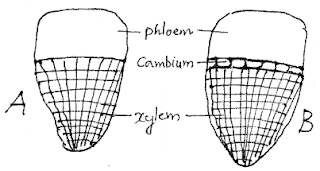 2012 March
1. Analyze the given statements and correct the false statements with respect to the underlined word.

a. In roots, vascular tissues are conjoint. (½)
b. Cork cambium is otherwise called phelloderm. (½)

2. In an anatomy lab, Ramu and Salim were taking transverse sections (T.S) of two specimens, A and B respectively. Their observations are given in the table. Complete the table. (4 x ½ =2)
3. An anatomist observed a peculiar type of large spherical bundle sheath cells in sugarcane leaf and a physiologist identified the presence of PEP carboxylase in that leaf mesophyll.

a. Name the meristem that causes secondary growth in vascular region and cortex.
b. Comment on the activity of this meristem.

OR
Some tissues in plants are not able to divide further

a. Suggest name of such tissues
b. Give any three examples
c. List the difference between epidermal tissue system of roots and leaves (3)

2. In the anatomy lab, Eugin observed the following features in the T.S of a plant part.

ii. Rearrange the given regions from the periphery to the center in their correct sequence. (1½).


1. Imagine that you and your father are visiting a timber shop to buy wood for making furniture. Timber shop owner suggested rosewood. Father seeks your help to determine the age of the wood.

a. As a botany student can you help your father?
b. Justify your answer. (1)

2. Two types of plant specimens were given to students for microscopical observation. They were directed to note down the features they observed. Major features noted by students were summarized in the box below. (2)

a. Name the two specimens.
b. Substantiate your answer by picking up the features of specimens from the box and write them in two columns.

2014 August (Improvement)
1. Stomata are small openings present in the epidermis of leaves. The stomata are bound by guard cells. Mention the role of guard cells in stomatal mechanisms. (2)

2015 March
1. In a dicotyledonous stem, secondary growth takes place at two regions by the activity of two lateral meristems.

a) Identify the two lateral meristems. (1)
b) List the new tissues formed from each of these meristems. (2)

2015 September (Improvement)
1. Identify the types of vascular bundles in figure 1 & 2. Write the features of each vascular bundle. (Hint: Any 2 points each) (3)

OR
Distinguish between leaf anatomy of dicot leaf and monocot leaf. (Hint: Any three points each)

2016 March
1. How does periderm develop in dicot stem and replace the outer broken cortical and epidermal layers? (3)

OR
In dicot stem, both intrafascicular and interfascicular cambium form a ring of vascular cambium. Explain the activity of this cambial ring. (3)

1. There are different types of leucoplasts in plant cells. Name the leucoplast that store proteins.

2. Complete the flowchart given below.

3. The tissue found between the upper and lower epidermis of a leaf is called mesophyll.

a) Write the type of cells found in this tissue in a dicot leaf.
b) Mention two differences between a dicot leaf and monocot leaf.