Answer all the questions from 1 to 3. Each carries 1 Score.

1. What is the function of Restriction Endonuclease in recombinant DNA technology?

3. Which among the following is not a greenhouse gas? 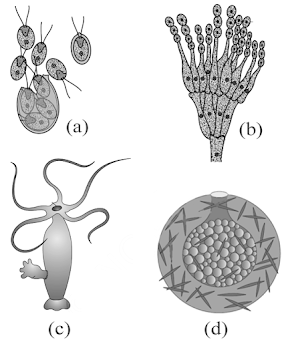 a. How is PCR useful in molecular diagnosis?
b. What is the principle of ELISA?

8. (a) Identify the type of ecological pyramid given below.
(b) Pyramid of energy is always upright. Why? 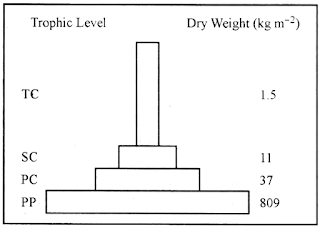 9. Deforestation is a serious issue in the present scenario. Write any two major consequences of deforestation.

10. Observe the flow chart given below: 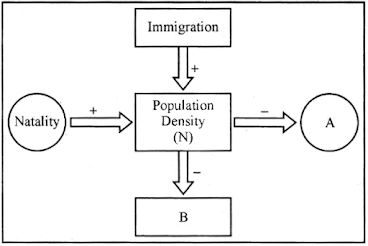 11. The early stages of embryo development are similar in both dicots and monocots. However, mature embryos have differences. Write two major differences between dicot embryo and monocot embryo.

12. Given below is a flow chart showing the accumulation of DDT in different trophic levels:

a. Name the phenomenon.
b. How does it affect bird population?

14. Double fertilization is a characteristic feature of angiosperms.

16. The discovery of Restriction Endonuclease is considered as "milestone" in the history of genetic engineering.

17. Observe the diagram of young anther given below.

a. Identify the parts labelled as A, B, C and D.
b. Which layer nourishes the developing pollen grains? 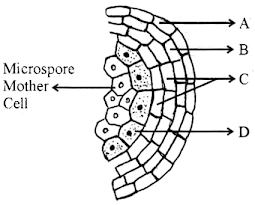 18. Outbreeding in animals may be outcrossing, crossbreeding and interspecific hybridisation.

a. Give an example for a progeny obtained by interspecific hybridisation,
b. How does outcrossing differs from crossbreeding?