2) There are different types of leucoplasts in plant cells. Name the leucoplast that store proteins.

3) Observe the relationship between the first two terms and fill in the blank.

4) Choose the correct answer from the bracket.

5) Match the following:
6) Complete the flowchart given below.

7) Ribosomes are organelles without a membrane found in all cells. Name another organelle devoid of membrane, seen in animal cells. Write its function. 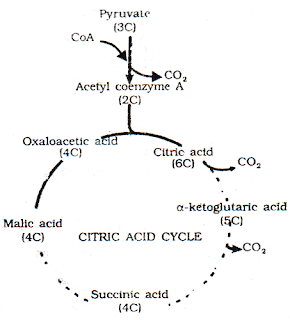 Identify the steps where FADH2 and GTP are synthesized.

10) The given figure shows a plant belonging to liverworts. 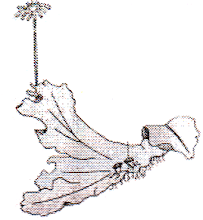 Identify the plant.
Name the asexual buds seen on it and write their features.

12) Write a note on the phenomenon plasticity exhibited by plants with an example.

13) The breakdown of glucose to pyruvic acid is called glycolysis. Where does it occur in a cell? How many ATP molecules are directly synthesized during this process?

14) The tissue found between the upper and lower epidermis of a leaf is called mesophyll.

a) Write the type of cells found in this tissue in a dicot leaf.
b) Mention two differences between a dicot leaf and monocot leaf.

15) Photosynthesis is a process influenced by environmental factors as well as plant factors. Mention three factors under each category.

16) First phase of meiosis I is typically longer and complex one. Name it. Mention the five subdivisions of this Phase.

18) Certain stages in cell cycle are given below.

Karyokinesis, prophase, cytokinesis, metaphase, anaphase, telophase.
Choose the statements (from those given below) that match with these stages and prepare a table.