Net gain of ATP from each glucose molecule is calculated based on the following assumptions:All steps in Glycolysis, TCA cycle & ETS occur sequentially and orderly.
Such assumptions are not valid because,
Such calculations are useful to appreciate the efficiency of the living system in extraction and storing energy.
Net gain of ATP molecules from one glucose molecule

2 ATP molecules are spent for transporting 2 NADH molecules formed during glycolysis to the mitochondria. Hence the net gain = 36 ATP molecules.

Other substrates are also respired. 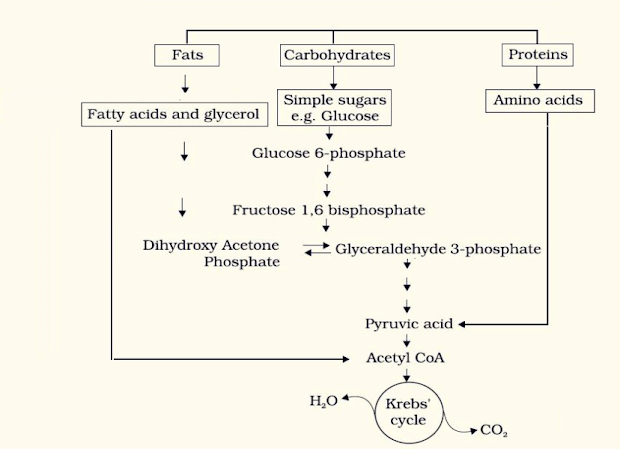 Fats breakdown into glycerol & fatty acids. Fatty acids are degraded to acetyl CoA and enter the pathway. Glycerol is converted to PGAL and enters the pathway.

Proteins are degraded by proteases into amino acids. Each amino acid (after deamination) enters the pathway at some stage in the Krebs’ cycle or as pyruvate or acetyl CoA.

The respiratory pathway is generally considered as a catabolic pathway. But it involves both anabolism (synthesis) and catabolism (breakdown). So it is better called as an amphibolic pathway.

Similarly, during breakdown and synthesis of protein, respiratory intermediates are involved.

RQ depends upon the type of respiratory substrate.

RQ for carbohydrates= 1, because equal amounts of CO2 and O2 are evolved and consumed, respectively.