It is a complete oxidation of organic substances in the presence of oxygen releasing CO2, water & energy.It occurs in mitochondria.

For this, the pyruvate (final product of glycolysis) is transported from the cytoplasm into the mitochondria.

During this process, 2 NADH molecules are produced from 2 pyruvic acid molecules. 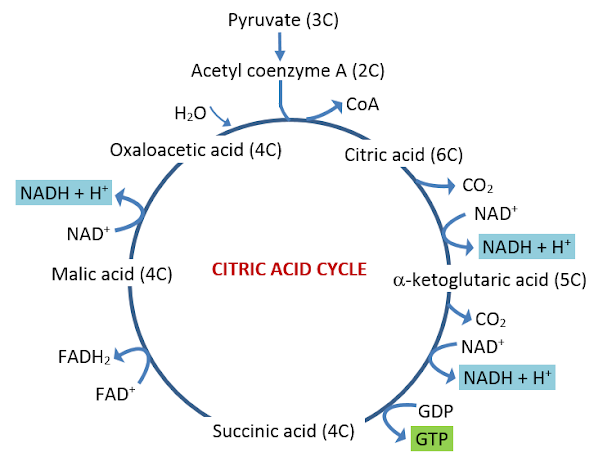 At 3 points of TCA cycle, NAD+ is reduced to NADH + H+. At one point, FAD+ is reduced to FADH2.
Continued oxidation of acetyl CoA via TCA cycle requires continued replenishment of OAA. It also requires regeneration of NAD+ & FAD+ from NADH & FADH2.

Electron Transport System (ETS) & Oxidative Phosphorylation
Electron transport system (ETS) is the metabolic pathway present in the inner mitochondrial membrane through which electron passes from one carrier to another.

This is to release and utilize energy stored in NADH+H+ and FADH2 (formed during TCA cycle) by oxidation.

The electrons are passed on to O2 to form H2O.

Electrons from NADH are oxidised by an NADH dehydrogenase (complex I).

Electrons are then transferred to ubiquinone (UQ) located within the inner membrane. Ubiquinone also receives reducing equivalents via FADH2 (complex II) that is generated during oxidation of succinate in citric acid cycle.

The reduced ubiquinone (ubiquinol or UQH2) is then oxidised with the transfer of electrons to cytochrome c via cytochrome bc1 complex (complex III). Cytochrome c is a small protein attached to the outer surface of the inner membrane. It acts as a mobile carrier of electrons between complex III and IV.

When the electrons pass from one carrier to another via complex I to IV, they are coupled to ATP synthase (complex V) for the ATP production. 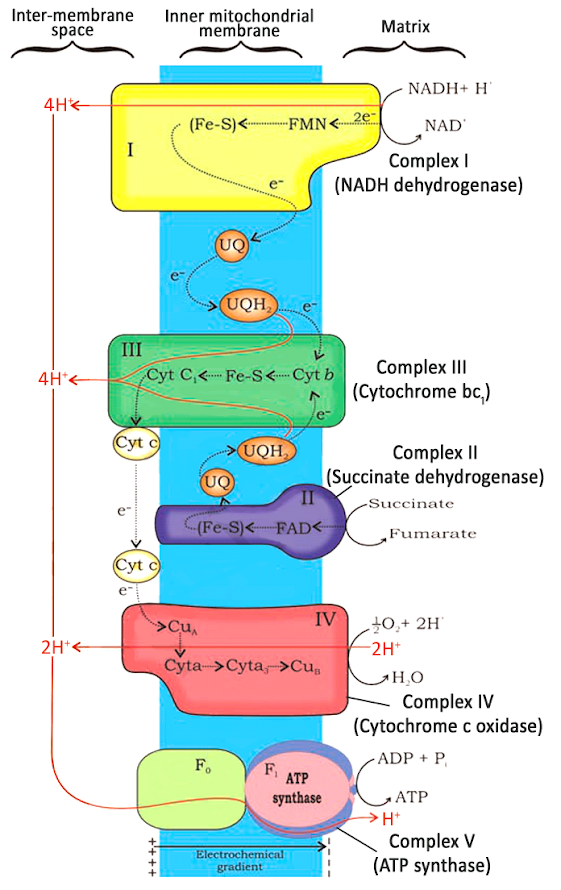 Oxidation of 1 NADH → 3 ATP
Oxidation of 1 FADH2 → 2 ATP
In aerobic respiration, the role of oxygen is limited to the terminal stage. Yet, oxygen is vital since it drives the whole process by removing hydrogen from the system. Oxygen acts as the final hydrogen acceptor.

The energy released during the ETS is utilized to synthesize ATP by ATP synthase (complex V). 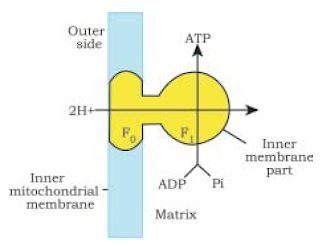 For each ATP produced, 2H+ passes through F0 from the inter-membrane space to the matrix down the electrochemical proton gradient.
===========
👇 Select Your Topic Here 👇