Based on the functions, PGRs are 2 groups:


Charles Darwin & his son Francis Darwin observed that the coleoptiles of canary grass responded to unilateral illumination by growing towards the light source (phototropism). It was concluded that the tip of coleoptile caused the bending of the entire coleoptile.

Auxins are produced by the growing apices of stems & roots, from where they migrate to regions of their action. 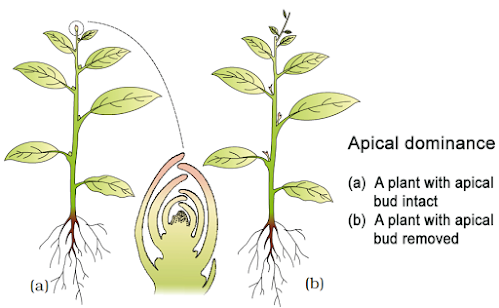 
These are acidic PGR.

E. Kurosawa treated the sterile filtrates of Gibberalla fujikuroi (a fungus that causes ‘bakane’ disease or foolish seedling in rice) to healthy rice seedlings. As a result, it showed the symptoms of ‘bakane’ disease. Later, the active substances were identified as gibberellic acid.

There are more than 100 gibberellins (GA1, GA2, GA3 and so on) in fungi and higher plants.

Gibberellic acid (GA3 or Terpenes) is one of the first discovered and most intensively studied gibberellins.


F. Skoog and co-workers observed that from the internodal segments of tobacco stems, the callus (a mass of undifferentiated cells) proliferated only if the nutrients medium was supplemented with extracts of vascular tissues, yeast extract, coconut milk or DNA.

Skoog & Miller later identified and crystallized the active substance and termed as kinetin.

Cytokinins were discovered as kinetin (N6-furfurylamino purine - an Adenine derivative) from the autoclaved herring sperm DNA.

Kinetin does not occur naturally in plants.

Zeatin (from corn-kernels and coconut milk) is the natural substances with cytokinin-like activities.

There are some synthetic compounds with cell division promoting activity.


Cousins confirmed that ripened oranges released a volatile substance that hastened the ripening of stored bananas. Later this substance was identified as ethylene.

Ethylene is a simple gaseous PGR.

It is synthesized in large amounts by tissues undergoing senescence and ripening fruits.

Functions:
The most widely used source of ethylene is ethephon. Ethephon in an aqueous solution is readily absorbed and transported within the plant and releases ethylene slowly. Ethephon hastens fruit ripening in tomatoes & apples and accelerates abscission in flowers and fruits (thinning of cotton, cherry, walnut). It promotes female flowers in cucumbers thereby increasing the yield.


During mid-1960s, it was reported 3 kinds of inhibitors: inhibitor-B, abscisin II & dormin. They were chemically identical and now known as abscisic acid.

ABA is the derivatives of carotenoids.

It regulates abscission and dormancy.

Functions:
Interactions of PGRs
PGRs play individualistic or synergistic role. Such roles may be complimentary or antagonistic.

In most situations, ABA acts as an antagonist to GAs.