ROLE OF LIGHT AND TEMPERATURE ON FLOWERING


It is the response of plants to periods of day/night.

Based on light duration, plants are 3 groups: 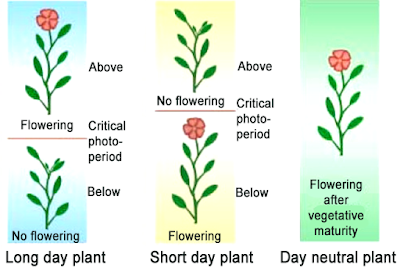 While shoot apices modify into flowering apices, they by themselves cannot perceive photoperiods. The site of perception of light/dark duration is the leaves.

It has been hypothesised that there is hormone(s) for flowering. When plants get enough photoperiod, the hormone migrates from leaves to shoot apices to induce flowering.


It is the phenomenon in which some plants depend quantitatively or qualitatively on exposure to low temperature for flowering.

It prevents precocious reproductive development late in the growing season, and enables the plant to have sufficient time to reach maturity.


Certain seeds fail to germinate even under favourable external conditions. Such seeds are in dormancy.