UPTAKE AND TRANSPORT OF MINERAL NUTRIENTS

Uptake of Mineral Ions
Most minerals are actively absorbed by the roots because
Active uptake of ions is partly responsible for the water potential gradient in roots, and therefore for the uptake of water by osmosis.

Some ions are absorbed passively.

The specific membrane proteins of root hair cells actively pump ions from the soil into the epidermal cells.

Endodermal cell membrane also has transport proteins. They allow only some solutes to cross the membrane. These proteins are control points, where a plant adjusts quantity and types of solutes that reach the xylem.

The suberin in the root endodermis allows the active transport of ions in one direction only.

Translocation of Mineral Ions
The ions reached in xylem are further transported to all parts of the plant through the transpiration stream.

The chief sinks for the mineral elements are
Unloading of mineral ions occurs at the fine vein endings through diffusion and active uptake by these cells.

Elements most readily mobilized are phosphorus, sulphur, nitrogen and potassium. Some elements that are structural components like calcium are not remobilized.

Nitrogen is mainly carried in organic forms such as amino acids & related compounds. Some travels as inorganic ions. Some P and S are also carried as organic compounds. There is also exchange of materials between xylem and phloem. So we cannot clearly say that xylem transports only inorganic nutrients while phloem transports only organic materials.


It is the long-distance movement of organic substances (food, primarily sucrose) from a source (region of synthesis the food i.e., leaf) to a sink (region of storage or utilization of food) through the phloem.

The source and sink may be reversed depending on the season or the plant’s needs. E.g. In early spring, the sugar stored in roots is moved to the tree buds for growth and development of photosynthetic apparatus. Thus root becomes the source and buds the sink.

The direction of movement in the phloem can be upwards or downwards (bi-directional).
In xylem, the movement is always upwards (unidirectional). Hence, food in phloem sap can be transported in any direction.

Phloem sap is mainly water and sucrose, but other sugars, hormones and amino acids are also translocated.

The Pressure Flow (Mass Flow) Hypothesis
It is the hypothesis that explains the mechanism of translocation of sugar (phloem transport).

The glucose prepared at the source (by photosynthesis) is converted to sucrose (a disaccharide).

Sucrose is moved into the companion cells and then into the living phloem sieve tube by active transport (loading). It produces a hypertonic condition in phloem (water potential decreases). Sieve tube cells form long columns with holes in sieve plates. Cytoplasmic strands pass through these holes forming continuous filaments. 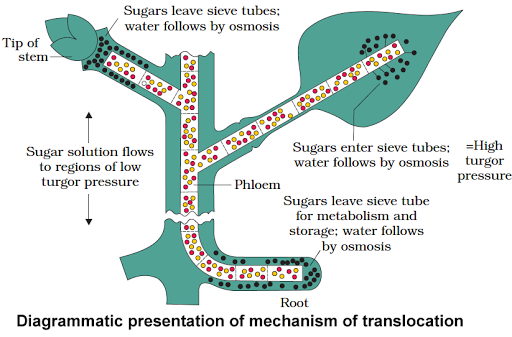 The sucrose from the phloem sap actively moves into the cells. The cells convert the sugar into energy, starch, or cellulose (complex carbohydrates).

As sugars are removed, osmotic pressure decreases (water potential increases) and water moves out of the phloem.

Identification of the tissue that transports food (girdling)
Carefully remove a ring of bark (including phloem layer) from a tree trunk.

After a few weeks, the portion of the bark above the ring on the stem becomes swollen. This is due to the absence of downward movement of food.

This shows that phloem is responsible for translocation of food; and that transport takes place in one direction, i.e., towards the roots.
===========
👇 Select Your Topic Here 👇