Water is a universal solvent.

Protoplasm is mainly water in which different molecules are dissolved and suspended.

A mustard plant absorbs water equal to its own weight in about 5 hours.

Water Potential (Ψw)
It is the potential energy of water.

It is the measure of the ability of water molecules to move freely in solution.

It is expressed in pressure units such as Pascals (Pa).

As the concentration of water in a system increases, its kinetic energy (‘water potential’) also increases. Hence, pure water will have the greatest water potential.

Water potential (Ψw) of pure water at standard temperatures, which is not under any pressure, is zero.

If a solute is dissolved in pure water, water potential decreases due to decrease in concentration (free energy) of water. Hence, Ψw of solutions is lower than pure water.

Magnitude of lowering of water potential due to dissolution of a solute is called solute potential (Ψs) or osmotic potential.

Ψs is always negative. The more the solute molecules, the lower (more negative) is the Ψs.

For a solution at atmospheric pressure, Ψw = Ψs.

If a pressure greater than atmospheric pressure is applied to pure water or a solution, its water potential increases. It is equivalent to pumping water from one place to another.

When water enters a plant cell due to diffusion, it causes a pressure against the cell wall. It makes the cell turgid. This increases the pressure potential (Ψp).

Pressure potential is usually positive, though negative potential or tension in the water column in the xylem plays a major role in water transport up a stem.

Water potential of a cell is affected by Solute potential & pressure potential. The relationship is:

Ψw = Ψs + Ψp
Osmosis
It is the spontaneous diffusion of water across a differentially- or semi-permeable membrane.

Cell membrane and tonoplast (membrane of vacuole) are important determinants of movement of molecules in or out of plant cell. But cell wall is not a barrier to movement as it is permeable to water & substances in solution.

Vacuolar sap in large central vacuole contributes to solute potential of the cell. 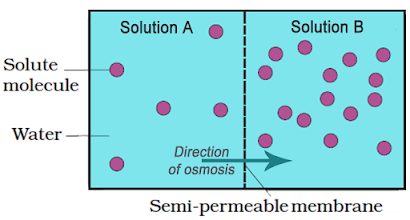 Make a cavity in a potato tuber. In this, pour concentrated sugar solution. This setup is called potato osmometer.

Place it in water. As a result, water enters the cavity due to osmosis.

A demonstration of osmosis: 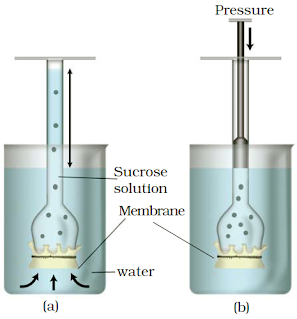 A thistle funnel filled with sucrose solution is kept inverted in a beaker containing pure water.

Water moves into the funnel. As a result, the level of the solution in the funnel rises. It continues till the equilibrium is reached (figure a).

If an external pressure is applied from the upper part of the funnel, no water diffuses into the funnel through the membrane (figure b).

Plasmolysis
If an external solution balances the osmotic pressure of the cytoplasm, it is called isotonic.
When a cell (or tissue) is placed in isotonic solution, there is no net flow of water towards inside or outside (water flow is in equilibrium). Such cells are said to be flaccid.

If the external solution is more dilute (higher water potential) than the cytoplasm, it is hypotonic. Cells swell (turgid) in hypotonic solution.

If the external solution is more concentrated (more solutes) than the cytoplasm, it is hypertonic.

When a cell is placed in a hypertonic solution, water moves from the cell (area of high water potential) across the membrane to outside (area of lower water potential) and the cell shrinks. It is called Plasmolysis. Water is first lost from the cytoplasm and then from the vacuole.
During plasmolysis, the cell membrane and protoplast of a plant cell shrinks away from its cell wall. Such cells are said to be plasmolysed.

Plasmolysis is usually reversible. When the cells are placed in a hypotonic solution, water diffuses into the cell. As a result, the cytoplasm builds up a pressure against the wall. It is called turgor pressure.
The pressure exerted by the protoplasts due to entry of water against the rigid walls is called pressure potential (Ψp). The cell does not rupture due to the rigidity of cell wall. Turgor pressure causes enlargement and extension growth of cells.

Imbibition
It is a type of diffusion in which water is absorbed by solids (colloids) increasing their volume. E.g. absorption of water by seeds and dry wood.

The pressure due to the swelling of wood can split rocks.

Seedlings are emerged out of the soil due to the imbibition pressure.