Nitrogen is the most prevalent element in living organisms.

Plants compete with microbes for the limited nitrogen in soil. Thus, nitrogen is a limiting nutrient for natural and agricultural eco-systems.

The process of conversion of atmospheric nitrogen (N2 or N≡N) to ammonia is called nitrogen fixation.

Decomposition of organic nitrogen of dead plants and animals into ammonia is called ammonification.

Some of this ammonia volatilizes and re-enters atmosphere but most of it is oxidised into nitrate by soil nitrifying bacteria (Nitrosomonas, Nitrococcus & Nitrobacter- chemo-autotrophs). These steps are called nitrification.

Plants absorb the nitrate and is transported to the leaves. In leaves, it is reduced to form ammonia that finally forms the amine group of amino acids. 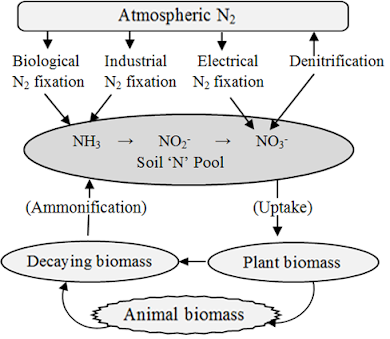 Nitrate present in the soil is also reduced to nitrogen by the process of denitrification. It is carried by bacteria Pseudomonas and Thiobacillus.


It is the reduction of N2 to NH3 by living organisms in presence of nitrogenase enzyme.

Very few organisms can utilize the nitrogen in the form of N2 in the air.

Only certain prokaryotic species have Nitrogenase enzyme and capability to fix N2. They are called N2- fixers.

The most common association on roots is as nodules.

Rhizobium & Frankia are free-living in soil, but as symbionts, can fix atmospheric nitrogen.

Central part of a nodule is red or pink coloured due to the presence of leguminous haemoglobin (leg-haemoglobin).

Principal stages in the Nodule formation: 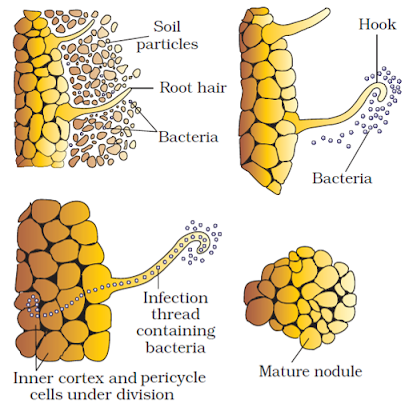 Nitrogenase (a Mo-Fe protein) catalyzes the conversion of nitrogen to NH3, the first stable product of N2 fixation.


Ammonia synthesis needs high input energy (8 ATP for each NH3). It is obtained from the respiration of host cells.

Nitrogenase is highly sensitive to the molecular oxygen. So it requires anaerobic conditions to protect from oxygen. For this, leg-haemoglobin acts as an oxygen scavenger.

Rhizobia are aerobic under free-living conditions (where nitrogenase is not operational), but during N2-fixing events, they become anaerobic (to protect nitrogenase).

At physiological pH, the NH3 is protonated to form NH4+ (ammonium) ion. Most of the plants can assimilate nitrate and NH4+. But NH4+ is quite toxic to plants and so cannot accumulate in them.

In plants, NH4+ is used to synthesize amino acids by 2 ways:

a. Reductive amination:
In this, ammonia reacts with a-ketoglutaric acid to form glutamic acid.

Asparagine & glutamine are most important amides found in plants. They are structural part of proteins. They are formed from 2 amino acids (aspartic acid & glutamic acid) by addition of another amino group to each. The hydroxyl part of the acid is replaced by another NH2- radical.

Since amides contain more nitrogen than the amino acids, they are transported to other parts of the plant via xylem vessels. In addition, along with the transpiration stream the nodules of some plants (e.g. soyabean) export the fixed nitrogen as ureides. These compounds also have particularly high nitrogen to carbon ratio.
===========
👇 Select Your Topic Here 👇