METHODS TO STUDY THE MINERAL REQUIREMENTS OF PLANTS


The technique of growing plants in a defined nutrient solution (without soil) is known as hydroponics.

It is demonstrated by Julius von Sachs (Germany, 1860).

The nutrient solution is aerated for optimum growth.

Hydroponics is used to identify the essential elements required for plants and their deficiency symptoms.

In this, plant roots are immersed in nutrient solutions and an element is added / removed or given in varied concentration. 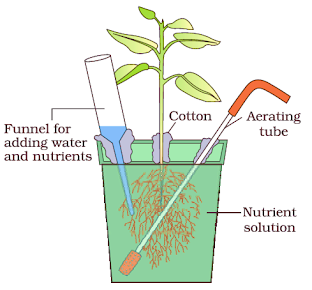 Hydroponics is used for commercial production of vegetables such as tomato, seedless cucumber & lettuce.


More than 60 elements are found in different plants.

There are techniques to detect the minerals even at a very low concentration (10^-8 g/mL).

Criteria for Essentiality of an element

Only 17 elements are absolutely essential for plant growth and metabolism.

Based on quantitative requirements, essential elements are 2 types: Macronutrients & Micronutrients.

i. Macronutrients
They are present in plant tissues in large amounts (more than 10 mmole Kg–1 of dry matter).

C, H & O are mainly obtained from CO2 & H2O. Others are absorbed from soil as mineral nutrition.

Based on functions, essential elements are 4 categories:

Role of Macro- and Micro-nutrients

The morphological changes due to deficiency or absence of an element are called deficiency symptoms.

If the elements are relatively immobile and are not transported out of the mature organs, the deficiency symptoms appear first in the young tissues. E.g. S and Ca are part of the structural component of the cell and hence are not easily released.

This aspect of mineral nutrition has great significance in agriculture and horticulture.

Chlorosis is the loss of chlorophyll leading to yellowing in leaves. It is due to the deficiency of elements N, K, Mg, S, Fe, Mn, Zn and Mo.

Necrosis is the death of tissue, particularly leaf tissue. It is due to the deficiency of Ca, Mg, Cu, K.

Any mineral ion concentration in tissues that reduces the dry weight of tissues by about 10% is considered toxic. Such critical concentrations vary widely among different micronutrients.

The toxicity symptoms are difficult to identify. Toxicity levels for an element also vary for different plants.

Excess of an element may inhibit the uptake of another element. E.g. Excess of Mn induces deficiencies of Fe, Mg & Ca because it competes with Fe & Mg for uptake and with Mg for binding with enzymes. Mn also inhibits Ca translocation in shoot apex. Thus symptoms of Mn toxicity may actually be the deficiency symptoms of Fe, Mg & Ca. Main symptom of manganese toxicity is the appearance of brown spots surrounded by chlorotic veins.
===========
👇 Select Your Topic Here 👇