Almost all constituents of the blood plasma except the proteins pass onto the lumen of the Bowman’s capsule.

About 1100-1200 ml of blood is filtered by the kidneys per minute. It constitutes 1/5th of the blood pumped out by each ventricle of the heart in a minute. 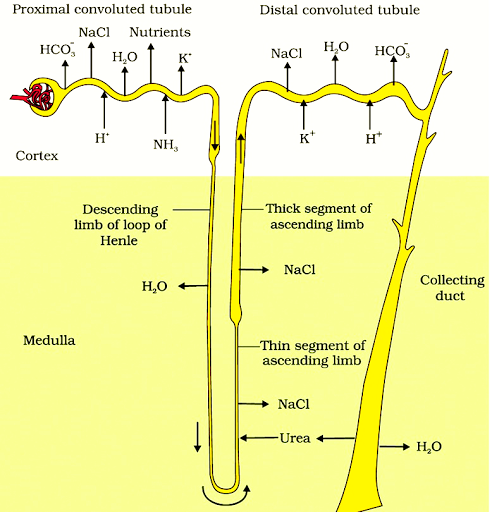 
180 litres of glomerular filtrate is produced daily. But about 99% of this is reabsorbed by the renal tubules.

So normal volume of urine released is 1.5 litres.

From the filtrate, glucose, amino acids, Na+, etc. are reabsorbed actively and nitrogenous wastes are absorbed passively. Passive reabsorption of water occurs in the initial segments of the nephron.

PCT reabsorbs most of the nutrients, and 70-80% of electrolytes & water. Simple cuboidal brush border epithelium of PCT increases surface area for reabsorption.

Descending limb is permeable to water but almost impermeable to electrolytes. This concentrates the filtrate.

In ascending limb, minimum reabsorption occurs. It is impermeable to water but allows transport of electrolytes. So, filtrate gets diluted.

Collecting duct extends from cortex to inner parts of medulla. It reabsorbs large amount of water to concentrate urine. It also allows passage of small amounts of urea into medullary interstitium to keep up the osmolarity.


Cells of PCT & DCT maintain ionic (Na-K balance) and acid-base balance (pH) of body fluids by selective secretion of H+, K+ & NH3 into the filtrate and absorption of HCO3- from it.

Collecting duct also maintains pH and ionic balance of blood by the secretion of H+ and K+ ions.

Mechanism of concentration of the filtrate
Henle’s loop & vasa recta help to concentrate the urine.

Due to the counter current and proximity between Henle’s loop & vasa recta, osmolarity increases from cortex (300 mOsmolL-1) to the inner medullary interstitium (1200 mOsmolL-1). This gradient is caused by NaCl & urea. 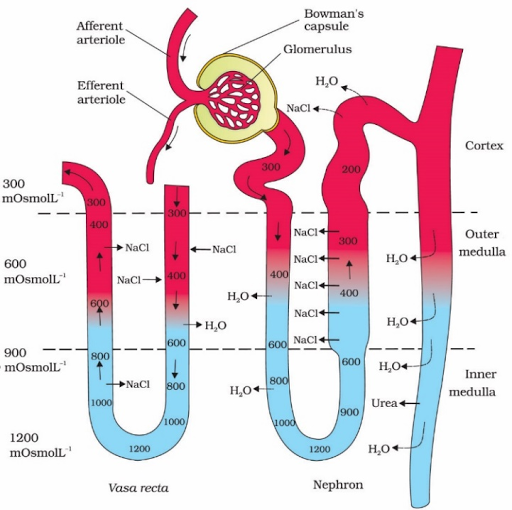 
Gradual filling of urinary bladder causes stretching. As a result, stretch receptors on its wall send impulses to CNS. The CNS passes on motor messages. It causes the contraction of smooth muscles of the bladder and simultaneous relaxation of the urethral sphincter. It results in micturition (release of urine).

Urine is a light yellow coloured watery fluid, slightly acidic (pH-6.0) and has a characteristic odour.

Analysis of urine helps in clinical diagnosis of many metabolic disorders and malfunctioning of the kidney.

Primary function of sweat is to give a cooling effect on body surface.