Greenhouse is a small glass house used for growing plants during winter. The glass panel lets the light in, but does not allow heat to escape. Thus the greenhouse warms up. 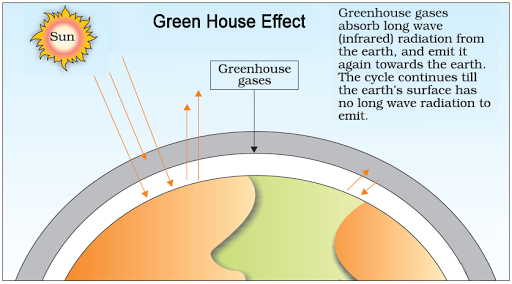 Clouds & gases reflect 1/4th of the incoming solar radiation and absorb some of it. But half of it falls on Earth’s surface heating it, while a small amount is reflected back. Earth’s surface re-emits heat as infrared radiation (long wave). But a part of it is absorbed by atmospheric gases (CO2, CH4 etc.) and so cannot escape into space. These gases (greenhouse gases) radiate heat energy. It comes to Earth’s surface, heating it up again. It causes the greenhouse effect.

Overheating of Earth due to increased level of greenhouse Gases, is called global warming.

During the past century, the temperature of Earth has increased by 0.6° C, most of it during the last 3 decades.

OZONE DEPLETION IN THE STRATOSPHERE


‘Bad’ ozone is formed in troposphere (lower atmosphere). It harms plants and animals.

‘Good’ ozone is found in the stratosphere. It acts as a shield absorbing ultraviolet radiation from the sun.

UV rays are highly injurious since they cause mutation.

The thickness of the ozone (O3) in a column of air from the ground to the top of the atmosphere is measured in terms of Dobson units (DU).

In stratosphere, UV rays act on molecular oxygen (O2) to produce ozone. UV rays also cause the degradation of ozone to O2. These processes are balanced.

But this balance is disrupted due to ozone degradation by chlorofluorocarbons (CFCs- used as refrigerant).

CFCs move upward and reach stratosphere. UV rays act on them releasing Cl atoms. In presence of Cl (catalyst), ozone degrades to O2. This causes ozone depletion. It has formed Ozone hole over the Antarctic region.