The Government of India has passed the Environment (Protection) Act, 1986 to control environmental pollution and protect and improve the quality of our environment.

AIR POLLUTION AND ITS CONTROL

According to Central Pollution Control Board (CPCB), particulate size of less than 2.5mm in diameter (PM 2.5) causes greatest harm to human health.

Catalytic converter:
It is the device to reduce emission of poisonous gases. It has platinum-palladium & rhodium as catalysts. This converts

Motor vehicles having catalytic converter should use unleaded petrol because lead in petrol inactivates the catalyst.

Electrostatic precipitator
It is the device to remove particulate matter.

It can remove over 99% particulate matter present in the exhaust from a thermal power plant.

The velocity of air between the plates must be low enough to allow the dust to fall. 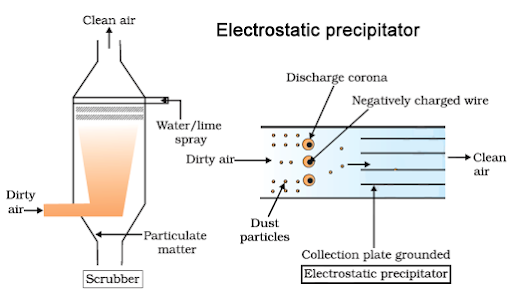 A scrubber removes gases like SO2. In this, the exhaust is passed through a spray of water or lime.

Very small particulates are not removed by this precipitator.

In India, the Air (Prevention & Control of Pollution) Act (1981) was amended in 1987 to include noise as an air pollutant.

Control sulphur content at 350 ppm (parts per million) in diesel and 150 ppm in petrol.
Level of aromatic hydrocarbons is to be at 42% of the fuel.
In future: Reduce sulphur to 50 ppm in petrol & diesel and bring down the level to 35%.
Upgrade vehicle engines.