It is the cell division occurring in somatic cells.

It is also called as equational division as the number of chromosomes in the parent and progeny cells is same.

Mitosis is generally seen in diploid cells. It also occurs in haploid cells of some lower plants and some social insects.

It involves major reorganization of all cell components.

The karyokinesis of mitosis has 4 stages: Prophase, Metaphase, Anaphase & Telophase. 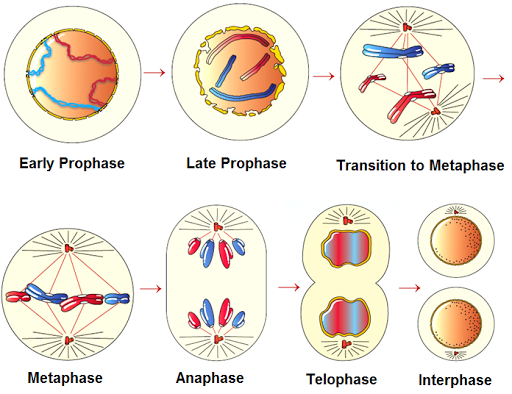 1. Prophase
It is the longest phase in mitosis.
It follows the S and G2 phases of interphase.
In the S & G2 phases, DNA molecules are intertwined.

2. Metaphase
The nuclear envelope completely disintegrates. Hence the chromosomes spread through the cytoplasm of the cell.

Chromosome condensation is completed. They can be observed and studied easily under the microscope. They will have two sister chromatids.

Chromosomes come to lie at the equator. The plane of alignment of the chromosomes at metaphase is called the metaphase plate.

The spindle fibres from both poles are connected to chromatids by their kinetochores in the centromere.

3. Anaphase
It is the shortest phase in the mitosis.

Centromere of each chromosome divides longitudinally resulting in the formation of two daughter chromatids (chromosomes of the future daughter nuclei).

As the spindle fibres contract, the chromatids move from the equator to the opposite poles.

4. Telophase
Chromosomes cluster at opposite poles and uncoil into chromatin fibres.

Nuclear envelope develops around the chromosome clusters at each pole. Thus 2 daughter nuclei are formed.

Cytokinesis
It is the division of cytoplasm to form 2 daughter cells.
It starts when telophase is in progress.

Cytokinesis in animal cell:
Cytokinesis in plant cell:
During cytokinesis, organelles like mitochondria and plastids get distributed between the daughter cells.

In some organisms, karyokinesis is not followed by cytokinesis. As a result, multinucleate condition (syncytium) arises. E.g. liquid endosperm in coconut.
Significance of Mitosis
===========
👇 Select Your Topic Here 👇