It is the cyclic contraction and relaxation of heart for pumping blood.
It involves 3 stages:

* The closure of the semilunar valves which prevents the backflow of blood into the ventricles.
* The tricuspid and bicuspid valves are opened by the pressure in the atria.

The ventricles and atria again undergo joint diastole and the above processes are repeated.
One heartbeat = a lub + a dub.


It is an instrument used to obtain electrocardiogram.

Electrocardiogram is the graphical representation of the electrical activity of the heart during a cardiac cycle.

To get an ECG, a patient is connected to the machine with 3 electrical leads (one to each wrist and to left ankle) that monitor heart activity. For a detailed evaluation of heart’s function, multiple leads are attached to the chest region.

An ECG consists of the following waves:

Deviation in the ECG indicates the abnormality or disease. So, ECG has great clinical significance.


It is the circulation in which blood flows through the heart twice for completing its circuit. 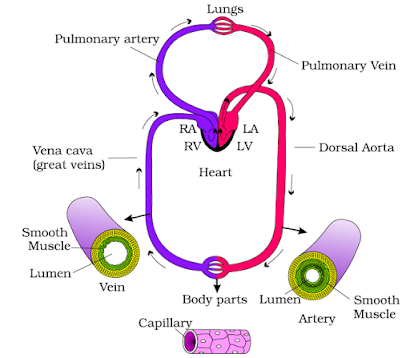 Hepatic portal system:
It is a system which includes the hepatic portal vein that carries blood from intestine to the liver before it is delivered to the systemic circulation.

Coronary circulatory system:
It is a system of coronary vessels that circulate blood to and from cardiac musculature.


Normal activities of heart are auto-regulated by nodal tissues. So, it is called myogenic heart.

Sympathetic nerves of ANS increase the rate of heartbeat, the strength of ventricular contraction and cardiac output.

Parasympathetic nerves of ANS decrease the heartbeat, conduction of action potential and the cardiac output.