It is a mesodermally derived organ located in mediastinum.

It has the size of a clenched fist.

It is protected by double-layered pericardium.

The pericardial space (between pericardial membranes) is filled with pericardial fluid. It reduces the friction between the heart walls and surrounding tissues.

The walls (cardiac muscles) of the ventricles are much thicker than that of the atria. 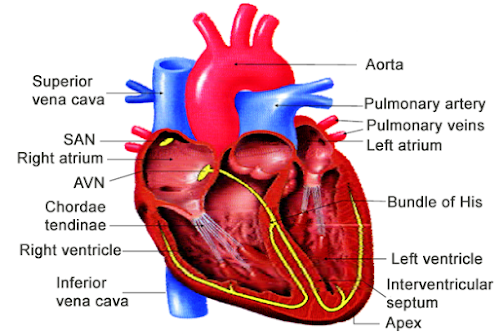 In between atrium and ventricle, there is a thick fibrous atrio-ventricular septum with an opening.

Nodal tissues generate action potential without any external stimuli, i.e. it is autoexcitable. SAN initiates and maintains contraction of heart by generating action potentials (70-75/min). So, it is called the pacemaker.
===========
👇 Select Your Topic Here 👇