·    Rana tigrina is the most common species in India.

·    They are poikilotherms (cold blooded).

·    They can change colour to hide them from their enemies (camouflage). This protective coloration is called mimicry.

·    During summer and winter, they undergo aestivation (summer sleep) and hibernation (winter sleep) respectively to protect them from extreme heat and cold.

·    Body is divisible into head & trunk. Neck and tail absent.

·    Skin is moist, smooth and slippery due to the mucus.

·    Colour of dorsal side is olive green with dark irregular spots and ventral side is pale yellow.

·    The frog never drinks water but absorb it through the skin.

·    A mouth, paired nostrils and bulged eyes (covered by nictitating membrane) are present.

·    On either side of eyes have a membranous tympanum (ear).

·    The forelimbs (4 digits) and hind limbs (5 digits) help in swimming, walking, leaping and burrowing. The hind limbs are larger and muscular than fore limbs.

·    Feet have webbed digits that help in swimming.

·    Frogs exhibit sexual dimorphism. Male frogs have sound producing vocal sac and also a copulatory (nuptial) pad on the first digit of fore limbs which are absent in female frogs. 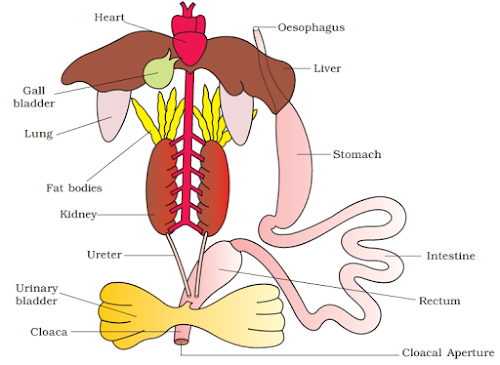 -    The alimentary canal is short because frogs are carnivores and hence the length of intestine is reduced.

-    Food is captured by the bilobed tongue.

-    Digestion: Gastric juice and HCl secreted from gastric wall digest the food. Partially digested food (chyme) is passed from stomach to the duodenum.

-    Finger-like villi and microvilli in intestine absorb digested food. The undigested solid waste moves into the rectum and passes out through cloaca.

-    Skin acts as aquatic respiratory organ (cutaneous respiration). Dissolved oxygen in the water is exchanged through the skin by diffusion. During aestivation and hibernation respiration takes place through skin.

-    On land, the buccal cavity, skin and lungs (pulmonary respiration) act as the respiratory organs.

-    The lungs are a pair of elongated, pink coloured sac-like structures present in the thorax. Air enters through the nostrils into the buccal cavity and then to lungs.

-    Heart is 3-chambered, (two atria and one ventricle) and is covered by a membrane called pericardium.

-    The ventricle opens into a saclike conus arteriosus on the ventral side of the heart.

-    The blood pumped from the muscular heart is carried to all parts of the body by the arteries (arterial system).

-    The veins collect blood from different parts of body to the heart and form the venous system.

-    Hepatic portal system (venous connection between liver and intestine) and renal portal system (between kidney and lower parts of the body) are present in frogs.

-    Kidneys are dark red and bean-shaped. Found posteriorly in the body cavity on both sides of vertebral column. Each kidney is formed of uriniferous tubules (nephrons).

-    2 ureters emerge from the kidneys. In male frogs, the ureters act as urinogenital duct which opens into cloaca.

-    The thin-walled urinary bladder is present ventral to the rectum which also opens in the cloaca.

-    The frog is a ureotelic animal (excretes urea). Nitrogenous wastes are carried by blood into the kidney where it is separated and excreted.

-    There are 10 pairs of cranial nerves arising from brain.

-    The brain is divided into

-    Medulla oblongata passes out through the foramen magnum and continues into spinal cord, which is enclosed in the vertebral column.

-    Sense organs include organs of

§ Simple eyes: For vision. Paired and situated in orbit

§ Tympanum with internal ears: For hearing and balancing (equilibrium). 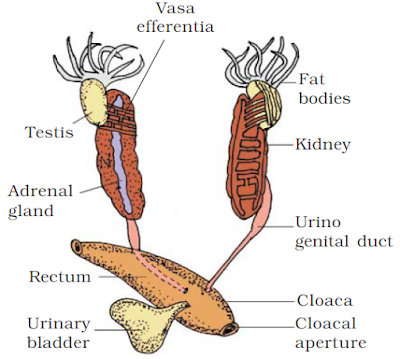 -  Male reproductive organs consist of a pair of yellowish ovoid testes, which are found adhered to the upper part of kidneys by a double fold of peritoneum (mesorchium).

-   Vasa efferentia (10-12 in number) arise from testes. They enter the kidneys on their side and open into Bidder’s canal. It communicates with urinogenital duct that comes out of the kidneys and opens into cloaca.

-    The cloaca is a small, median chamber that is used to pass faecal matter, urine and sperms to the exterior. 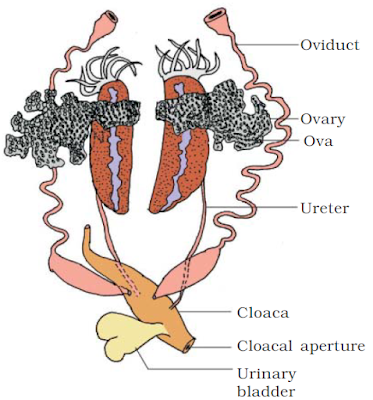 - The female reproductive organs include a pair of ovaries. The ovaries are situated near kidneys and there is no functional connection with kidneys.

-    A pair of oviduct arising from the ovaries opens into the cloaca separately.

-    Fertilisation is external and takes place in water.

-    Frogs are beneficial for mankind because they eat insects and protect the crop.

-    Maintain ecological balance by serving as an important link of food chain and food web in the ecosystem.

-    In some countries the muscular legs of frog are used as food by man.