·   Earthworm is a reddish-brown terrestrial invertebrate that inhabits the upper layer of moist soil.

·   During day time, they live in burrows made by boring and swallowing the soil. 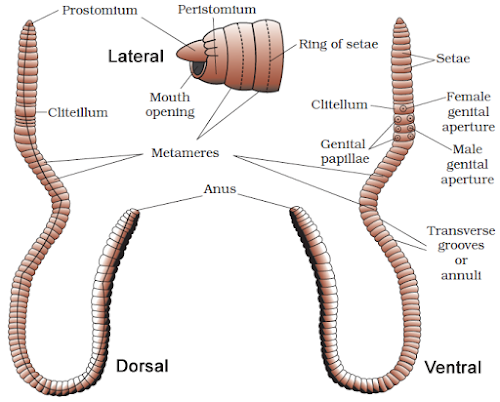 ·   Dorsal surface has a dark median mid dorsal line (dorsal blood vessel) along the longitudinal axis of the body.

·   Prostomium is sensory in function and is used to force open cracks in the soil into which the earthworm may crawl.

·   In a mature worm, segments 14-16 are covered by a dark band of glandular tissue called clitellum.

·   A single female genital pore is present in the mid-ventral line of 14th segment.

·   A pair of male genital pores is present on the ventro - lateral sides of the 18th segment.

·   Many minute nephridiopores open on the body surface.

· All segments except the first, last and clitellum bear S-shaped setae, embedded in the epidermal pits. Setae can be extended or retracted. Their function is locomotion.