-   After entering the synergid, the pollen tube releases 2 male gametes into the cytoplasm of the synergid. One male gamete moves towards the egg cell and fuses with its nucleus (syngamy) to form zygote (diploid).
-  The other male gamete moves towards the two polar nuclei located in the central cell and fuses with them to produce a triploid primary endosperm nucleus (PEN). As it involves
fusion of 3 haploid nuclei, it is called triple fusion.
-   Since 2 types of fusions (syngamy & triple fusion) take place in an embryo sac, it is called double fertilisation.
It is an event unique to flowering plants.
-  The central cell after triple fusion becomes the primary endosperm cell (PEC) and develops into the endosperm while the zygote develops into an embryo. 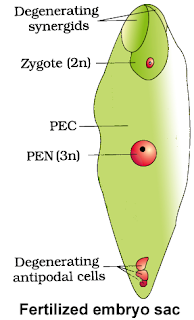 -    Primary endosperm cell (PEC) divides repeatedly to form a triploid endosperm tissue.
-    Endosperm cells are filled with reserve food materials. They are used for nutrition of the developing embryo.
-    In common endosperm development, PEN undergoes successive nuclear divisions to give free nuclei (free-nuclear endosperm). Number of free nuclei varies greatly.
-    Endosperm becomes cellular due to cell wall formation.
-    Tender coconut water is a free-nuclear endosperm (made up of thousands of nuclei) and the surrounding white kernel is the cellular endosperm.

-    Embryo develops at the micropylar end of the embryo sac where the zygote is situated.
-    Most zygotes divide only after the formation of some endosperm. This provides nutrition to developing embryo.
-    In monocots & dicots, seeds differ greatly but embryogeny (early embryonic developments) is similar.
-    Zygote → Pro-embryo → Globular → Heart-shaped → Mature embryo. 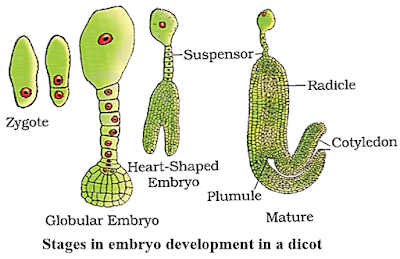 Monocotyledonous embryo
-    They possess only one cotyledon.
-    Cotyledon of the grass family is called scutellum.
-    It is situated lateral to the embryonal axis. At its lower end, the embryonal axis has the radicle and root cap enclosed in coleorrhiza (an undifferentiated sheath).
-    Portion of embryonal axis above the level of attachment of scutellum is the epicotyl. It has a shoot apex and a few leaf primordia enclosed in coleoptile (a hollow foliar structure). 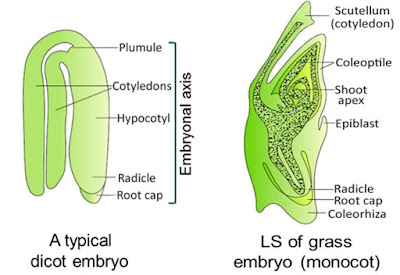 -    Seed is the fertilized ovule formed inside fruits. It is the final product of sexual reproduction.
-    It consists of seed coat(s), cotyledon(s) & an embryo axis.
-    The cotyledons are simple, generally thick and swollen due to storage food (as in legumes).
-    Mature seeds are 2 types:
o  Non-albuminous (Ex-albuminous) seeds: Have no residual endosperm as it is completely consumed during embryo development. E.g. pea, groundnut, beans.
o  Albuminous seeds: Retain a part of endosperm. E.g. wheat, maize, barley, castor, coconut.
-    Occasionally, in some seeds (black pepper, beet etc.) remnants of nucellus are also persistent. It is called perisperm.
-    Integuments of ovules harden as tough protective seed coats. It has a small pore (micropyle) through which O2 & water enter into the seed during germination.
-    As the seed matures, it becomes dry by reducing water content (10-15 % moisture by mass). The metabolic activity of the embryo slows down. It may enter a state of inactivity (dormancy). Under favourable conditions (moisture, oxygen & suitable temperature), they germinate. 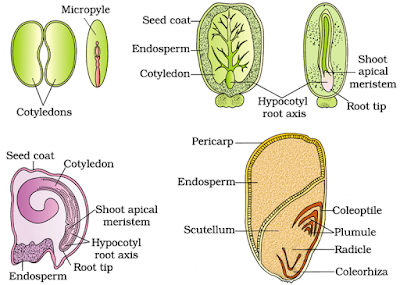 Structure of some seeds
Advantages of seeds:
·   Since pollination and fertilisation are independent of water, seed formation is more dependable.
·   Better adaptive strategies for dispersal to new habitats. It helps the species to colonize in other areas.
·   They have food reserves. So seedlings are nourished until they are capable of photosynthesis.
·   The hard seed coat protects the young embryo.
·   Being products of sexual reproduction, they generate new genetic combinations and variations.
·   Dehydration & dormancy helps to store seeds. It can be used as food throughout year and to raise crop in next season.

Viability of seeds after dispersal:
-    In a few species, the seeds lose viability within a few months. Seeds of many species live for several years.
-    Some seeds can remain alive for hundreds of years. The oldest is that of a lupine (Lupinus arcticus) excavated from Arctic Tundra. The seed germinated and flowered after an estimated record of 10,000 years of dormancy.
-    2000 years old viable seed is of the date palm (Phoenix dactylifera) discovered during the archeological excavation at King Herod’s palace near the Dead Sea.

-    The ovary develops into a fruit. Transformation of ovules into seeds and ovary into fruit proceeds simultaneously.
-    The wall of ovary develops into pericarp (wall of fruit).
-    The fruits may be fleshy (e.g. guava, orange, mango, etc.) or dry (e.g. groundnut, mustard etc.).
-    Fruits are 2 types:
o  True fruits: In this, fruit develops only from the ovary. Other floral parts degenerate & fall off. E.g. most plants.


APOMIXIS AND POLYEMBRYONY
-    Apomixis is the production of seeds without fertilisation. E.g. Some species of Asteraceae and grasses.
-    It is a form of asexual reproduction that mimics sexual reproduction.
-    In some species, diploid egg cell is formed without reduction division and develops into the embryo without fertilisation.
-    In many species (e.g. many Citrus & Mango varieties) some nucellar cells surrounding the embryo sac divide, protrude into the embryo sac to form embryos. Thus each ovule contains many embryos. Occurrence of more than one embryo in a seed is called polyembryony.
Importance of apomixis in hybrid seed industry
-    If the seeds collected from hybrids are sown, plants in the progeny will segregate and lose hybrid characters.
-    Production of hybrid seeds is costly. So hybrid seeds are also expensive. If the hybrids are made into apomicts, there is no segregation in the hybrid progeny. So farmers can keep on using hybrid seeds to raise new crop.
============
👇 Select Your Topic Here 👇