-    Several hormonal and structural changes result in differentiation & development of the floral primordium.
-    Inflorescences bear the floral buds and then the flowers.

STRUCTURE OF A FLOWER 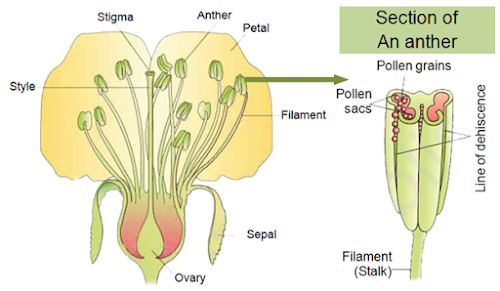 A typical flower has 2 parts: Androecium & Gynoecium.
Androecium (male reproductive part)
It consists of a whorl of stamens. Their number and length are variable in different species.
A stamen has 2 parts:
a.    Filament: Long and slender stalk. Its proximal end is attached to the thalamus or the petal of the flower.
b.  Anther: Terminal and typically bilobed. Each lobe has 2 thecae (dithecous). Often a longitudinal groove runs lengthwise separating the theca.

-    The anther is a tetragonal structure consisting of four microsporangia located at the corners (2 in each lobe).
-    The microsporangia develop to pollen sacs. They extend longitudinally all through the length of an anther and are packed with pollen grains.
Structure of a microsporangium:

-    A typical microsporangium is near circular in outline.
-    It is surrounded by 4 wall layers: epidermis, endothecium, middle layers & tapetum (innermost layer).
-    The outer 3 layers give protection and help in dehiscence of anther to release the pollen.
-    The tapetum nourishes the developing pollen grains. Cells of the tapetum contain dense cytoplasm and generally have more than one nucleus.
-    In young anther, each microsporangium has sporogenous tissue at centre. It consists of compactly arranged homogenous diploid cells (sporogenous cells).

-    Formation of microspores from pollen mother cell (PMC) through meiosis is called microsporogenesis.
-    As the anthers mature and dehydrate, the microspores dissociate from each other and develop into pollen grains.
-    Each microsporangium contains thousands of pollen grains. They are released with the dehiscence of anther. 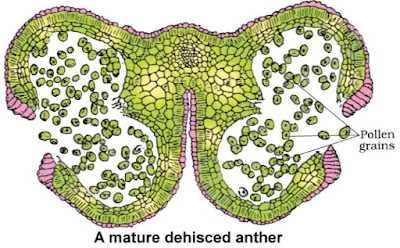 Pollen grain (male gametophyte):
Generally spherical. 25-50 mm in diameter. Cytoplasm is surrounded by a plasma membrane.
A pollen grain has a two-layered wall: exine and intine.
o Exine: Hard outer layer. Made up of sporopollenin (highly resistant organic material). It can withstand high temperature and strong acids and alkali. Enzymes cannot degrade sporopollenin.
Exine has apertures called germ pores where sporopollenin is absent.
Pollen grains are preserved as fossils due to the presence of sporopollenin. Exine exhibits patterns and designs.
o Intine: Inner wall. It is a thin and continuous layer made up of cellulose and pectin.
A matured pollen grain contains 2 cells:
o Vegetative cell: It is bigger, has abundant food reserve and a large irregularly shaped nucleus.
o Generative cell: It is small and floats in the cytoplasm of the vegetative cell. It is spindle shaped with dense cytoplasm and a nucleus. 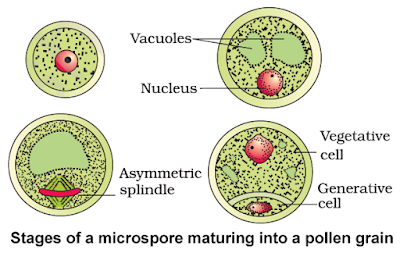 o  These are rich in nutrients. Pollen tablets are used as food supplements. Pollen tablets & syrups increase performance of athletes and race horses.
o  They are stored for years in liquid nitrogen (-1960 C). They can be used as pollen banks in crop breeding programmes.
o  Pollen grains of some plants (e.g. Parthenium or carrot grass) are allergic for some people. It leads to chronic respiratory disorders (asthma, bronchitis, etc.).
Gynoecium (female reproductive part) 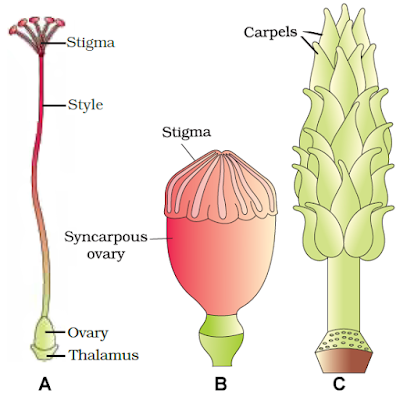 Each pistil has three parts:
o  Stigma: Landing platform for pollen grains.
o  Style: Elongated slender part beneath the stigma.
o  Ovary: Basal bulged part. It has ovarian cavity (locule) in which placenta is located. Arising from the placenta are the ovules (megasporangia). Number of ovules in an ovary may be one (wheat, paddy, mango etc.) to many (papaya, water melon, orchids etc.).
Structure of Megasporangium (Ovule): 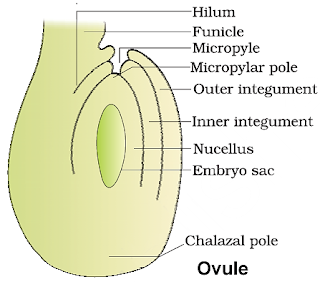 -    Ovule is attached to the placenta by a stalk (funicle).
-    Junction between the body of ovule and funicle is called hilum.
-    Each ovule has 1 or 2 protective envelopes (integuments) except at the tip where a small opening (micropyle) is present.
-    Opposite the micropylar end is the chalaza (basal part).
-    Enclosed within the integuments, there is a mass of cells called nucellus. Its cells contain reserve food materials.
-    Inside the nucellus is embryo sac (female gametophyte).
-    An ovule generally has a single embryo sac formed from a megaspore.

-    It is the formation of megaspores from megaspore mother cell (MMC).
-    Ovules generally differentiate a single MMC in micropylar region of the nucellus. It is a large cell containing dense cytoplasm and a prominent nucleus.
-    MMC undergoes meiosis to produce 4 megaspores. 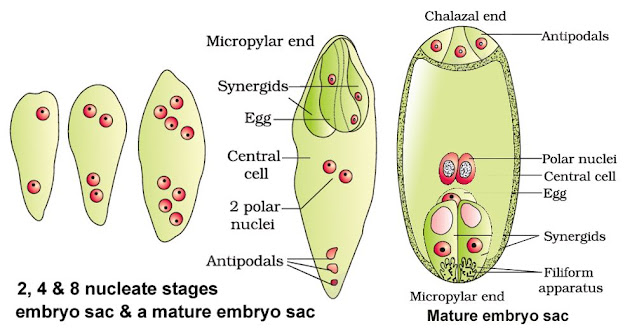 -    These divisions are free nuclear, i.e. nuclear divisions are not followed immediately by cell wall formation.
-    After the 8-nucleate stage, cell walls are laid down leading to the organization of the typical female gametophyte.
-    6 of the 8 nuclei are surrounded by cell walls and organized
into cells. Remaining 2 nuclei (polar nuclei) are situated below the egg apparatus in the large central cell.

Distribution of cells within the embryo sac:
A typical mature embryo sac is 8-nucleate and 7-celled.
o  3 cells (2 synergids + one egg cell) are grouped at the micropylar end and form egg apparatus.
Synergids have special cellular thickenings at the micropylar tip called filiform apparatus. It helps to guide the pollen tubes into the synergid.
o  3 cells (antipodals) at the chalazal end.
o  A large central cell with two polar nuclei.
============
👇 Select Your Topic Here 👇