-    They were based on vegetative characters or superficial morphological characters such as habit, colour, number and shape of leaves, etc.

-    Linnaeus’s artificial system of classification was based on the androecium structure.

-    They separated the closely related species since they were based on a few characteristics.

-    Equal weightage to vegetative and sexual characteristics. This is not acceptable since the vegetative characters are more easily affected by environment.

-    These are based on natural affinities among organisms.

-    It is based on evolutionary relationships among organisms.

-    This assumes that organisms in the same taxa have a common ancestor.

Other sources to resolve the problems in classification:

o Numerical Taxonomy: It is based on all observable characteristics. It is easily carried out using computers. Number & codes are assigned to all the characters and the data are processed. Thus, hundreds of characters can be equally considered.

o Cytotaxonomy: It is based on cytological information like chromosome number, structure, behaviour etc.

-    They also occur in moist stones, soils and wood.

-    Some occur in association with fungi (lichen) and animals (e.g., on sloth bear).

-    The form and size of algae is highly variable.

-    Vegetative reproduction: By fragmentation. Each fragment develops into a thallus.

-    Asexual reproduction: By the production of spores. E.g. zoospores (most common). They are flagellated (motile) and on germination gives rise to new plants.

-    Sexual reproduction: Through fusion of two gametes. It is many types:

o  Isogamous: Fusion of gametes similar in size. They may be flagellated (e.g. Ulothrix) or non-flagellated (non-motile, e.g. Spirogyra).

☺  Through photosynthesis, they fix half of the total CO2 on earth and increase the level of dissolved oxygen.

☺  They are primary producers and the basis of the food cycles of all aquatic animals.

☺  Many marine algae (70 species) are used as food. E.g. Porphyra, Laminaria and Sargassum.

☺  Agar (from Gelidium & Gracilaria) is used to grow microbes and in ice-creams and jellies.

-    They are usually grass green due to the pigments chlorophyll a and b in chloroplasts.

-    The chloroplasts may be discoid, plate-like, reticulate, cup-shaped, spiral or ribbon-shaped in different species.

-    Most of them have one or more pyrenoids (storage bodies) located in the chloroplasts. Pyrenoids contain protein besides starch.

-    They have a rigid cell wall made of an inner layer of cellulose and an outer layer of pectose.

o Vegetative reproduction: By fragmentation or by formation of different types of spores.

-    They are mostly marine forms.

-    They have chlorophyll a, c, carotenoids & xanthophylls.

-    They vary in colour from olive green to brown depending upon the amount of a xanthophyll pigment, fucoxanthin.

-    Food is stored as complex carbohydrates (laminarin or mannitol).

-    The vegetative cells have a cellulosic wall covered by a gelatinous coating of algin.

-    Plant body is attached to substratum by a holdfast, and has a stalk (stipe) and leaf like photosynthetic organ (frond). 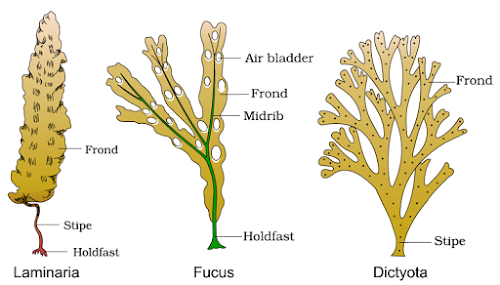 -    They have a red pigment, r-phycoerythrin.

-    Majority are marine especially in the warmer areas.

-    They occur in both well-lighted regions close to the surface of water and at great depths in oceans where relatively little light penetrates.

-    The red thalli of most of the red algae are multicellular.

-    Some of them have complex body organisation.

-    The food is stored as floridean starch which is very similar to amylopectin and glycogen in structure. 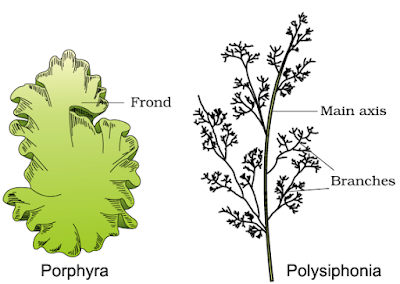