- They are called amphibians of the plant kingdom because they can live in soil but need water for sexual reproduction.

-    They occur in damp, humid and shaded localities.

-  Their body is more differentiated than that of algae. It is thallus-like and prostrate or erect, and attached to the substratum by unicellular or multicellular rhizoids.

-    They lack true roots, stem or leaves. They may possess root-like, leaf-like or stem-like structures.

-    The main plant body is haploid. It produces gametes, hence is called a gametophyte.

-    The sex organs in bryophytes are multicellular.

-    Antherozoids are released to water and meet archegonium. An antherozoid fuses with the egg to form zygote.

-    Zygotes do not undergo meiosis immediately. They produce a multicellular body called a sporophyte.

-    Sporophyte is not free-living but attached to the photosynthetic gametophyte and derives nourishment from it. Some cells of the sporophyte undergo meiosis to form haploid spores. They germinate to form gametophyte.

☺  Some mosses provide food for herbaceous mammals, birds and other animals.

☺  Species of Sphagnum (a moss) provide peat. It is used as fuel. It has water holding capacity so that used as packing material for trans-shipment of living material.

☺  They are ecologically important because of their role in plant succession on bare rocks/soil. Mosses along with lichens decompose rocks making the substrate suitable for the growth of higher plants.

☺  Since mosses form dense mats on the soil, they can prevent soil erosion.

The bryophytes are divided into liverworts and mosses.

-    They grow usually in moist, shady habitats such as banks of streams, marshy ground, damp soil, bark of trees and deep in the woods.

-    Their plant body is thalloid. E.g. Marchantia. Thallus is dorsi-ventral and closely appressed to the substrate. The leafy members have tiny leaf-like appendages in two rows on the stem-like structures.

-    Asexual reproduction: By fragmentation of thalli, or by the formation of gemmae (sing. gemma). Gemmae are green, multicellular, asexual buds that develop in small receptacles (gemma cups) on the thalli. Gemmae are detached from the parent body and germinate to form new individuals.

-    Sexual reproduction: Male and female sex organs are produced on the same or different thalli. Sporophyte is differentiated into a foot, seta and capsule. After meiosis, spores are produced within the capsule. These spores germinate to form free-living gametophytes. 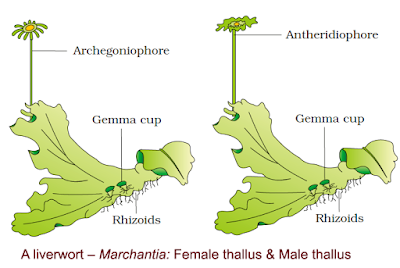 -    The predominant stage of the life cycle of a moss is the gametophyte. It consists of two stages.

o Protonema stage: The first stage which develops directly from a spore. It is a creeping, green, branched and frequently filamentous stage.

o Leafy stage: The second stage which develops from the secondary protonema as a lateral bud. They consist of upright, slender axes bearing spirally arranged leaves. They are attached to soil through multicellular and branched rhizoids. This stage bears the sex organs.

-    Vegetative reproduction: By fragmentation and budding in the secondary protonema.

-    Sexual reproduction: The antheridia & archegonia are produced at the apex of leafy shoots. After fertilisation, zygote develops into a sporophyte, consisting of a foot, seta and capsule. The sporophyte in mosses is more elaborate than that in liverworts. The capsule contains spores. Spores are formed after meiosis. Mosses have an elaborate mechanism of spore dispersal. 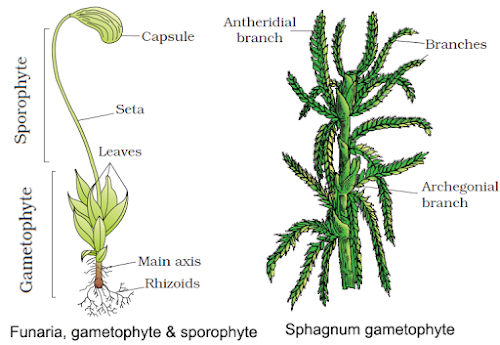