§ It is the exaggerated response of the immune system to certain antigens present in the environment.

§ Antibodies produced against the allergens are IgE type.

§ IgE binds on mast cells to release chemicals like histamine and serotonin from them. It results in allergic reactions.

§ Determination of cause of allergy: The patient is exposed to or injected with very small doses of possible allergens, and the reactions studied.

§ Treatment: Drugs like anti-histamine, adrenaline and steroids quickly reduce the symptoms of allergy.

§ Asthma is a respiratory disease due to allergy.

§ Modern-day life style and protected environment provided early in life result in low immunity and more sensitivity to allergens. So, many children in metro cities suffer from allergies and asthma.

-   In higher vertebrates, memory-based acquired immunity evolved based on the ability to differentiate foreign organisms from self-cells.

-   Sometimes, due to genetic and other unknown reasons, the body attacks self-cells resulting in damage to the body. It is called auto-immune disease. E.g. Rheumatoid arthritis.

§ It is the deficiency of immune system.

§ Syndrome means a group of symptoms.

§ It is caused by HIV (Human Immunodeficiency Virus), a retrovirus having RNA genome.

§ From infected mother to her child through placenta.

High risk people of getting HIV:

HIV does not spread by touch or physical contact. It spreads only through body fluids.

There is a time-lag (from few months to 5-10 years) between the infection and appearance of symptoms. 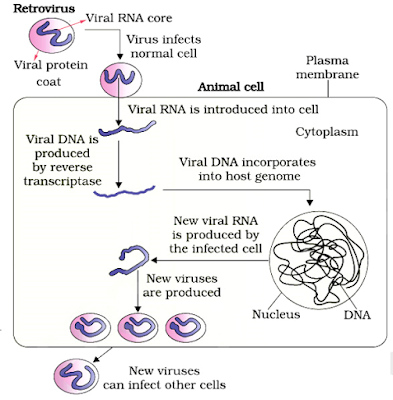 § During this period, the person suffers from fever, diarrhoea and weight loss.

§ Due to deficiency of TH cells, he may be infected with Mycobacterium, viruses, fungi & parasites like Toxoplasma.

§ Treatment: Anti-retroviral drugs are partially effective. They can only prolong the life of the patient.

o  Use disposable needles and syringes.