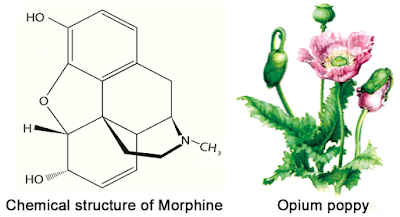 -   Morphine is extracted from latex of Papaver somniferum (poppy plant).  It is a sedative & painkiller. Used in surgery.

-   Heroin (smack or diacetylmorphine) is a white, odourless, bitter crystalline compound. It is obtained by acetylation of morphine. It is taken by snorting and injection. Heroin is a depressant and slows down body functions.

-   They interact with cannabinoid receptors in the brain.

-   Cannabinoids are abused by some sportspersons.

-   It is obtained from coca plant Erythroxylum coca.

-   It interferes with transport of neurotransmitter dopamine.

Drugs like barbiturates, amphetamines, benzodiazepines, etc. are used as medicines to treat mental illnesses like depression & insomnia. But their abuse causes impairment of physical, physiological or psychological functions.

·   Tobacco has been used by human beings for over 400 years.

·   It contains many chemical substances like nicotine (an alkaloid). It stimulates adrenal gland to release adrenaline and nor-adrenaline, causing high BP and heart rate.

·   Smoking increases CO content in blood and reduces oxyhaemoglobin. This causes O2 deficiency in the body.

-    Adolescence is ‘a period’ and ‘a process’ during which a child becomes mature in terms of his/her attitudes and beliefs for effective participation in society.

-    Adolescence is a bridge linking childhood and adulthood (period of 12-18 years of age). It is very vulnerable phase of mental and psychological development.

Causes of drug/alcohol use in Adolescence

-    Need for adventure and excitement.

-    Stress from pressure to excel in academics or examination.

·   Addiction: It is a psychological attachment (euphoria and a temporary feeling of wellbeing) with drugs and alcohol. With repeated use of drugs, the tolerance level of the receptors increases. Thus the receptors respond only to higher doses leading to greater intake and addiction.

·   Dependence: It is the tendency of the body to manifest a characteristic and unpleasant withdrawal syndrome if regular dose of drugs/alcohol is abruptly discontinued. This results in anxiety, shakiness, nausea and sweating.

·   Coma and death due to respiratory failure, heart failure or cerebral haemorrhage.

·   Drugs mixed with alcohol may cause death.

·   Mental and social distress to family and friends.

·   Social problems like stealing and spread of infectious diseases (e.g. AIDS, hepatitis B).

·   Use of drugs and alcohol by pregnant woman affect the foetus (Foetal alcohol syndrome or FAS).

·   Loss of sexual drive and necrospermia.

·   Drop in academic performance and absence from school.

·   Lack of interest in personal hygiene.

·    Change in sleeping and eating habits.

·   Loss of interest in hobbies.

·   Deteriorating relationships with family and friends.

Side effects of anabolic steroid abuse

In males:
In females:

In adolescent male & female: Severe facial and body acne, premature closure of the growth centres of the long bones resulting in stunted growth.

3.    Seeking help from parents and peers.

a. Psychologists and psychiatrists.
b. De-addiction and rehabilitation programs.