Tubular glands found on the inner wall. They consist of

b. Chief (zymogen or peptic) cells: Secrete proenzymes like pepsinogen & prorennin and some lipase.

-  Situated in abdominal cavity, just below the diaphragm.

- A lobule has many hepatic cells arranged as cords around a central vein. They secrete alkaline bile juice.

-  Bile is transported from liver to duodenum as follows: 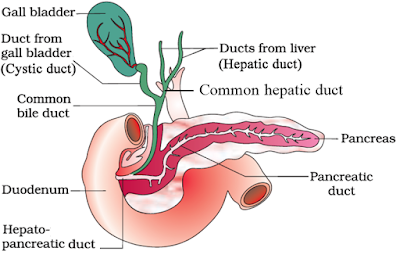 -  Hepato-pancreatic duct is guarded by sphincter of Oddi.

-    It is a cream-coloured heterocrine gland, i.e. it has both exocrine and endocrine parts.