Breathing and exchange of gases: Previous Year Questions | 2010 to 2014

BREATHING AND EXCHANGE OF GASES

1. In a 400 metre race competition, Athira won the first place. Her friends commented that it is due to her high vital capacity.

1. In a normal person expiratory reserve volume and residual volume were found to be 1000 ml and 1100 ml respectively.

a. Identify the partial pressure of oxygen where 50% of saturation of Hb with oxygen. (½)
b. Mention the factors favourable for the formation of oxyhaemoglobin in alveoli. (1½)

1. The graph given below is the oxygen –haemoglobin dissociation curve. Observe the graph and answer the following questions.

a. Identify the PO2 where 90% haemoglobin saturation occurs. (½)
b. Write any three factors favorable for the formation of oxyhaemoglobin in alveoli. (1½)

a. Pneumonia is a chronic disorder due to cigarette smoking.
b. Carbon dioxide combines with haemoglobin to form carbamino haemoglobin.
c. Respiratory rhythm is maintained by the respiratory centre in the heart.
d. Alveoli are the primary sites of exchange of gases. (2)

1. Prepare an equation for a chemical reaction using the following components.

2. Observe the figure and answer the questions. 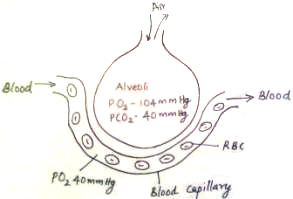 1. Pick out the wrong one and justify your selection. (2)

1. Observe the diagram and answer the following question: (2)

a. Name the biological process involved in the gas exchange shown in the figure. (½)
b. How the oxygen is transported to cells from the alveoli? (1½)

1. Blood transports CO2 from tissues to lungs by various means. Mention any two methods of the same. (2)

a. What is represented by the above graph?
b. Write any three factors which can influence the sigmoid curve of this graph. (½ +1½= 2)