1.   Ethane, with the molecular formula C2H6 has

2.   Butanone is a four-carbon compound with the functional group

3.  While cooking, if the bottom of the vessel is getting blackened on the outside, it means that

(a) the food is not cooked completely.

(b) the fuel is not burning completely.

(d) the fuel is burning completely.

(b) The fuel is not burning completely.

4.   Explain the nature of the covalent bond using the bond formation in CH3Cl.

Covalent bond is formed by sharing of electrons so that the combining atoms complete their outermost shell.

Electronic configuration of C is 2,4

Electronic configuration of H is 1

Three hydrogen atoms complete their shells by sharing three electrons (one electron each) of carbon atom.

Chlorine completes its outer shell by sharing its one out of seven electrons with one electron of carbon atom.

5.   Draw the electron dot structures for 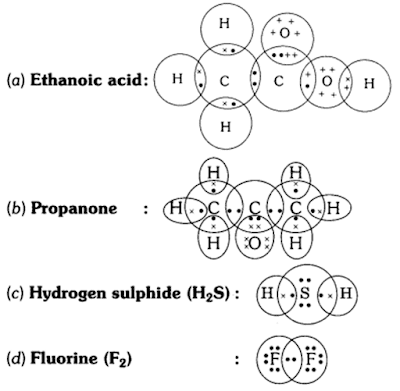 6.   What is a homologous series? Explain with an example.

Homologous series is a group of organic compounds having similar structures and similar chemical properties in which the successive compounds differ by -CH2 group. E.g. general formula of the homologous series of alkanes is CnH2n+2. Here, ‘n’ denotes number of carbons.

7.  How can ethanol and ethanoic acid be differentiated on the basis of their physical and chemical properties?

Differences on the basis of physical properties:

Differences on the basis of chemical properties:

8.  Why does micelle formation take place when soap is added to water? Will a micelle be formed in other solvents such as ethanol also?

Micelle formation is not be possible in solvents like ethanol in which sodium salt of fatty acids do not dissolve.

9.   Why are carbon and its compounds used as fuels for most applications?

Carbon and its compounds give a large amount of heat per unit weight.

10. Explain the formation of scum when hard water is treated with soap.

Hard water contains salts of calcium and magnesium. On reacting with soap, they form insoluble precipitate called scum. This reduces the cleansing property of soaps in hard water.

11. What change will you observe if you test soap with litmus paper (red and blue)?

12. What is hydrogenation? What is its industrial application?

Application: It is used to prepare vegetable ghee (or vanaspati ghee) from vegetable oils.

13. Which of the following hydrocarbons undergo addition reactions?

C3H6 and C2H2. Addition reactions occurs only in unsaturated hydrocarbons.

14. Give a test that can be used to differentiate chemically between butter and cooking oil.

Add bromine water to some cooking oil and butter taken in each test tubes.

Cooking oil decolourises bromine water showing that it is an unsaturated compound.

Butter does not decolourise bromine water showing that it is a saturated compound.

15. Explain the mechanism of the cleaning action of soaps.

When a dirty cloth is put in soap water, the hydrocarbon end of the soap molecules in micelle attach to the oil or grease particles on the cloth. The ionic ends of the soap molecules in the micelles remain attached to water. When the dirty cloth is agitated in soap solution, the oily and greasy particles entrapped by micelles get dispersed in water. Thus the cloth gets cleaned. 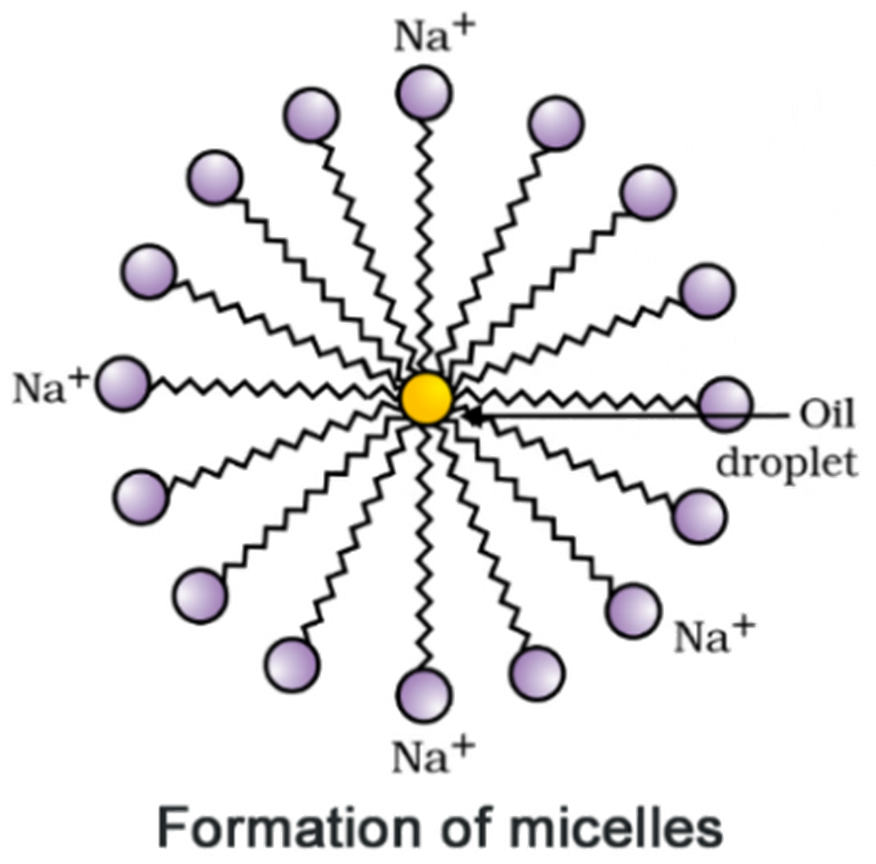