PRINCIPLES OF INHERITANCE AND VARIATION

1. Which of the following is not a dominant trait?
(a) Yellow seed
(b) Green pod
(c) Terminal flower
(d) Round seed

3. Note the relationship between first two terms and fill up the fourth place.

4. An inheritance in which heterozygous offspring shows intermediate character between two parental characteristics is called …………….

7. Which of the following do not have similar sex chromosome (homogametic)?

8. An analysis of genetic traits in several generations of a family is called …………….

9. A single gene exhibits multiple phenotypic expressions. It is called

10. Chromosomal Theory of Inheritance was proposed by

11. Which of the following is not a Mendelian disorder?

Colour-blindness, Down's syndrome, Haemophilia, Thalassemia
12. ............... is a metabolic disorder that occurs due to lack of an enzyme that converts phenyl alanine to tyrosine.

13. Regarding Haemophilia (Royal disease), which of the following is wrong?

a. Queen Victoria was not homozygous for the disease.
b. It is more common in male than female.
c. It is a chromosomal disorder affecting X chromosome.
d. It is a sex-linked recessive disease.

14. Identify the syndrome from the genotypes given below:


15. A genetic cross is represented below. 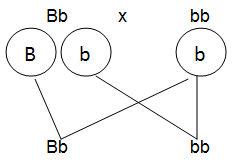 a. Identify the given cross.
b. Mention the significance of such cross.

17. Observe the inheritance shown in A and B. 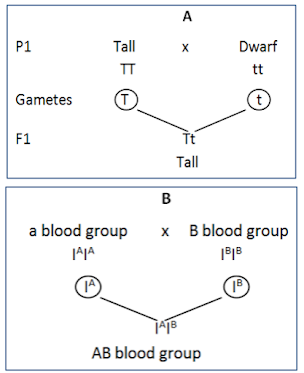 18. The following table shows the F2 generation of a Dihybrid cross. Identify the phenotype with homozygous recessive genotype. Find out A: B: C: D.

19. Study the following cross and answer the questions.

a. Write the genotypes of Father, Mother and Son.
b. Whether any change in blood group will occur if they have a daughter instead of son? Why?

20. Anil argues that if the father is ‘A’ blood group and mother is ‘B’ blood group, their children can only be ‘A’ group, ‘B’ group or ‘AB’ group. Do you agree with Anil’s argument? Give reason for your argument.

21. Drosophila is an ideal material for genetic study. Why? (Any 4 reasons).

22. Sex of the Baby is determined by the father, not by the mother. Substantiate.

23. The sudden heritable change occurring in the DNA sequence is called mutation.

a. What are the different types of mutation? Briefly explain any one of them.
b. Sickle cell anaemia is due to ………. mutation.

24. Observe the figure and answer the questions. 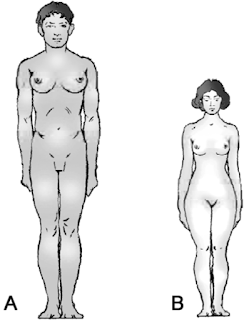 a. Identify the syndromes A and B.
b. What is the chromosome numbers in A and B?

25. Observe the diagram given below:

a. Identify the syndrome. Write its karyotype.
b. It occurs in both sexes. Write the reason.

26. Complete the table using suitable term.
27. Symbols used in human pedigree analysis and their meanings are provided in the table. Fill in the blanks with suitable meaning or symbols.

28. Certain facts related to human disorder are given:
a. Name the disorder.
b. What are the physiological processes behind this mental retardation?

29. Diagrammatic representation of chromosome map of Drosophila is given below.


30. State Mendel’s Laws of inheritance.
31. Work of a student is given below:

a. Mention any one genotype and phenotype.
b. Complete the work using the Punnet square and find out the F2 phenotypic ratio.

32. Analyse the given pedigree charts.

a. Identify the traits in figure A & B. Give one example for each.
b. What show the shaded symbols used?

33. The beta globin chains of the haemoglobin molecule of two persons are given below.

a. Which person has abnormal chain?
b. Name the disorder affected him.
c. Briefly explain the reason for that disorder

(b) No. Because the gene of blood group is present in autosome not in sex chromosome. So there is no influence of sex in blood grouping.

20. No. Because if father and mother have heterozygous genotypes of blood groups (Father: IAi, Mother: IBi ), they can have O group offspring (ii).

24. (a) A= Klinefelter’s syndrome. B= Turner’s syndrome.
(b) A= 47 chromosomes. B= 45 chromosomes.
25. (a) Down’s syndrome. Genotype= 45A + XX/ XY.
(b) Because it affects an autosome pair (21 trisomy). It is not a sex chromosomal problem.
26. (a) 44A + X0.
(b) Klinefelter’s syndrome.
(c) Feminine nature/ sterile male.
(d) Down’s syndrome.
27. (a) Male.
(b) ¡
(c) Sex unspecified.
(d) n
28. (a) Phenylketonuria.
(b) Due to the lack of the enzyme phenylalanine hydroxylase, phenylalanine accumulates and converts into phenyl pyruvic acid and other derivatives. They accumulate in brain resulting in mental retardation.
29. (a) Genes of yellow body and white eye.
(b) Alfred Sturtevant.
(c) Tightly linked genes have no independent assortment or have low crossing over.
30. Mendel’s Laws of inheritance:

2. Law of Segregation: “During gamete formation, the factors (alleles) of a character pair present in parents segregate from each other such that a gamete receives only one of the 2 factors”.
3. Law of Independent Assortment: “When two pairs of traits are combined in a hybrid, segregation of one pair of characters is independent of the other pair of characters”. 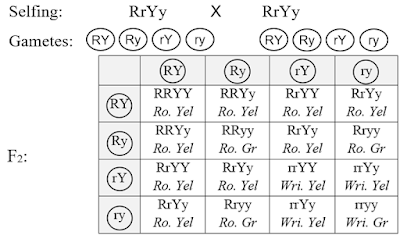 (b) Shaded symbols represent affected individuals and show that the traits are affected to both male & female.